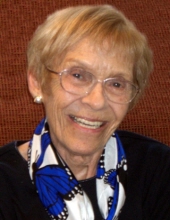 Phyllis Z. Seton, widow of the late Fenmore R. Seton, died peacefully on August 8, 2019, just one month shy of her 99th birthday. She passed away following a lifetime of accomplishment, purpose and devotion to family, friends and the community. She will be remembered not only for her many worthy civic and philanthropic interests and for her unfailing energy but also for her personal elegance, style and good humor. Phyllis lived in the Greater New Haven area for more than 65 years. During that time she and Fen made significant and lasting contributions to the lives of those around them. Phyllis was born in New York on September 10, 1920 and grew up in New York and Weston, Connecticut. She earned her Bachelor's degree from Cornell University (1941, French literature) and her Master's in Education from Yale and Southern Connecticut State University. She married her beloved Fen in April 1942 and they shared incredibly happy and productive lives together until Fen's death in 2003. During World War II, while Fen was serving with the Army Air Force in Europe, Phyllis worked as an Associate Production Director and Program Coordinator (with the late Alistair Cooke) for the BBC (North American Services) producing radio programs for overseas listeners. In 1952 when the Air Force posted Fen to Yale, the Setons moved to New Haven. Shortly after arriving, Phyllis and Fen created the Seton Name Plate Company (SNP). Over the years SNP grew and became well established, ultimately employing many in the New Haven area. Now a major division of the Brady Corporation it is simply called Seton and has a very significant domestic and international presence. Phyllis' interests centered on children, the disadvantaged and the disabled, locally, nationally and internationally. She served in multiple capacities on many boards including Save the Children Federation, the New Haven Children's Center, Easter Seal/Goodwill Industries Rehabilitation Center, the Connecticut Easter Seal Society, the Edgerton Park Conservancy, the New Haven Symphony Orchestra, the OC Marsh Fellows at the Peabody Museum, The New Haven Creative Arts Workshop, The New Haven Colony Historical Association (now the New Haven Museum) and the International Center at Yale. From 1960-1967 she was the sole female member of the New Haven Board of Education as well as a member of the Board of Directors of the Task Force administering the first major grant from the Ford Foundation to the New Haven School System. For many years she was an alternate delegate to the World Assembly meetings of Rehabilitation International, a worldwide organization working to improve the quality of life of people with disabilities. Phyllis and Fen were committed philanthropists. In 1979 they established and later endowed the annual Elm and Ivy Awards at Yale University, which honor members of the Yale and New Haven communities who have worked to foster and improve town/gown relationships. They also endowed the Seton Yale Book Award and the Children's Fund for Edgerton Park. While their many contributions were well recognized, they were particularly proud of their joint receipt of the Yale Medal, their honorary doctorates from Albertus Magnus College, the Seal of the City Award from the New Haven Historical Society and the Connecticut Philanthropist of the Year Award from the National Society of Fundraising Executives. Both Phyllis and Fen were members of Yale's Elizabethan Society and were long time Fellows of Calhoun (now Hopper) College at Yale. Phyllis had a life-long fascination with other cultures and visited more than 100 foreign countries. The Seton Art Gallery at the University of New Haven now houses much of their collection of New Guinea art. Even after she stopped traveling, Phyllis continued to have a lively interest in international events and developments as well as a more local focus, which included Evergreen Woods (where she moved in 2006) and where, at various times, she served on the Employee Scholarship Committee, the Art Committee, the Concert Committee and the Finance Committee. Phyllis was predeceased by her parents, Joseph and Anne Zimmerman, and her sister Mimi Zimmerman Gordon. She is survived by her loving daughter Diana (Dinny) Seton Wakerley and her son-in-law Charles both of Hamden; her two grandsons Christopher Adams and his wife Denise of Salt Lake City and James Adams and his wife Annie of Hamden; her four great-granddaughters (Zoe Adams, Sierra Adams, Emilia Adams and Aila Adams), her sister-in-law Suzanne M. Seton of Greenwich, CT and many nieces, nephews and their families. The family would like to extend special thanks to Phyllis' companion, Victoria Ruth Angwenyi who added immeasurably to the contentment of the last two years of her life. The impact of Ruth's kindness, skill, empathy and friendship cannot be overstated. Phyllis was an extraordinary and talented woman whose kindness and forbearance will endure as an inspiration to everyone who loved her. We feel her loss acutely. She is missed so very much. A memorial celebration of Phyllis' life will be held at 11 a.m. on Friday, August 16, 2019 at Beecher and Bennett Funeral Home (2300 Whitney Avenue, Hamden, Connecticut 06518). In lieu of flowers, contributions in Phyllis' memory can be made to Gaylord Hospital (50 Gaylord Farm Road, Wallingford, CT 06492), the Phyllis Z Seton Fund for Women and Girls at the Community Foundation for Greater New Haven (70 Audubon Street, New Haven, CT 06510) or to an organization of your choice.