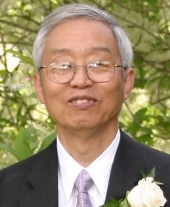 Pyungseek 'Paul' Sohn, age 76, passed away at his home in Hamden on November 19, 2015. Born in Kaesong, Korea on May 25, 1939 he was a son of the late Dr. Keumsung Sohn & Sookim Kim Sohn. Pyungseek is survived by his wife Jungseek 'Judy' Park Sohn; his daughter Ginhee Sohn Ungar & her husband Peter of Somerville, MA; his son Youngho Sohn of South Korea; his grandchildren Sebestien, Matteus & June Ungar and his sister Hwaja Kim of South Korea. He was predeceased by his sisters Whasook Hahn and Aisook Sohn and his brother Dr. Steven Sohn. Pyungseek has been a resident of Hamden since 1968. He was a longtime member of the New Haven Korean Church and past-president of the Korean American Association. Pyungseek was employed many years by the Western Electric Company and was a volunteer many times with Habitat for Humanity. Friends may visit with his family at BEECHER & BENNETT FUNERAL HOME, 2300 Whitney Ave, Hamden on Friday from 7:00 to 9:00 PM with a prayer service beginning at 8:00 PM and may attend his funeral at 9:00 AM on Saturday from the funeral home with his Funeral Service to follow at 10:00 AM in the New Haven Korean Church, Short Hill Road, Hamden. Interment will take place in Centerville Cemetery, Hamden. Contributions in Pyungseek's memory may be made to the New Haven Korean Church, 42 Glen Parkway, Hamden, CT 06517. To send a condolence to his family please see: www.beecherandbennett.com