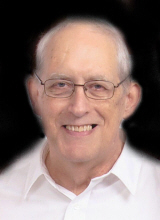 Raymond Paul 'Paul' Andersen died Sunday, March 6, 2016, at Masonicare Hospice after a lengthy struggle with multiple health issues. He was born on May 2, 1938 in New Haven, CT. He was the son of Erma Mae (Price) and Raymond Paul Andersen, Sr. He is survived by his wife Dorothy (Knowlton) Andersen, daughter Jennifer (Andersen) Simoniello and her partner Gary Kazmer, daughter Pamela Andersen and her husband Chris Luddy, and grandsons Maxwell Andersen Luddy and Jack Austen Luddy. He also leaves cousins Sandra (Peter) Benzi and Nina (Jim) Anderson of Guilford, CT and Merrillyn Courser of West Halifax, VT. Paul lived most of his life in Hamden, CT. He graduated from Hamden High school, where he was a member of the track team and enjoyed throwing the javelin. Paul attended the University of Connecticut and was an active member of the InterVarsity Christian Fellowship. One year he was president of the organization and has remained lifelong friends with many of its members. He graduated with a Bachelor of Arts degree in 1961. He was a loving husband who shared over 54 years of marriage with Dorothy (Knowlton) Andersen. They were married at Warrenville Baptist Church in Ashford, CT. Paul was a devoted father, spending lots of time with his daughters Jennifer and Pamela. 'Boppo' was a loving grandfather to Max and Jack and will be forever in their hearts. After college, Paul worked for a short time at Cyanamid in Wallingford and Aetna Insurance in Hartford. One day he decided to stop 'pushing pencils' and he became a talented Professional Photographer working out of the studio he built in his home with the help of his father. Paul was active in the Hamden Rotary Club and the Connecticut Professional Photographers Association. Many friends and neighbors remember having Paul photograph their wedding. Later in life he was also a part time driver for Elim Park, in Cheshire, CT. Paul was very spiritual, had great faith in God and was active in many Christian organizations. If friends and family desire, they may consider donating to one of two organizations: InterVarsity Christian Fellowship at UConn by check made payable to IVCF/USA with 'Staff Work at UConn' in the subject line and mail to: InterVarsity, PO Box 7895, Madison, WI 53707 or donate online at: https://donate.intervarsity.org/donate#12651 or to Masonicare Home, Health and Hospice, 104 South Turnpike, Wallingford Connecticut 06492. Paul was laid to rest in a private ceremony on March, 10, 2016 near Knowlton farm in Ashford, CT. Arrangements are in care of BEECHER & BENNETT FUNERAL HOME, 2300 Whitney Ave, Hamden. To send a condolence to his family please see: www.beecherandbennett.com