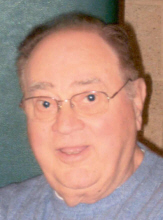 In Hamden, Thursday, November 1, 2007, Ralph 'Babe' Antonio, 78, of Mather St., Hamden. Loving and devoted uncle of William C. (Laura) Garcia of Hamden and Robert (Sharon Raudat) Garcia of East Haven; Great Uncle of William R. and Robert A. Garcia; Brother of Lorraine E. Garcia of Hamden and the late Edward B., Harry M., Ernest, Marshall Antonio and Margaret Casanova. Ralph also leaves several nieces and nephews. Born in Hamden, March 4, 1929, he was a son of the late Pasquale and Margaret Nardy Antonio. Ralph was co-owner/operator, with his brother Ed, of the former Pine Rock Tile, Co., the Hamden Package Shop and then of B & B Deli in Hamden from 1979-2005. He was an avid bowler in Hamden for many years, a fan of Hamden Fathers and Hamden High School Baseball and was an avid Red Sox Fan. He was also an Army Veteran of the Korean War. Funeral from Beecher & Bennett, 2300 Whitney Ave., Hamden, Monday, November 5 at 9:30 am. Mass of Christian Burial will be celebrated at St. Ann Roman Catholic Church, 930 Dixwell Ave., at 10 am. Friends may call Sunday, November 4 from 4-7 pm. Burial with Military Honors will take place in Beaverdale Memorial Park, Hamden. Contributions in his memory can be made to Connecticut Hospice, 110 Barnes Rd., Wallingford, CT 06492.