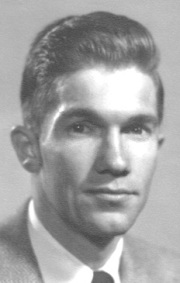 Ralph Case Burr died peacefully at his home in Hamden, Connecticut, on April 2, 2022, five days after his 100th birthday.
He was born in Poughkeepsie, New York, on March 28, 1922, the second son of the late Charles Munson and Mabel Leila (Case) Burr. The family later moved to West Hartford, Connecticut, where Ralph attended William H. Hall High School. He earned his B.A. degree from Yale University in 1943 (Class of ’44), where he was a member of the Sigma Xi honor society and the Berzelius senior society. Following graduation he served in the U.S. Navy (Pacific) as a Lieutenant, junior grade, from 1943 to 1946, then returned to Yale to earn his M.A. and Ph.D. degrees. Apart from a brief stint teaching mathematics at The Taft School, he spent his entire working career at Yale, where his roles included director of the Financial Aid Office and later executive director of the Yale Law School Fund. He retired in 1997.
It was at the Financial Aid Office that he met Violet Fairbairn Field, who worked in the same office, and the two were married on August 22, 1959. They went on to have three sons and were married for 40 years, until Violet’s death in January 2000.
Ralph loved sports, music and nature. As an undergraduate at Yale, he was on the college crew, hockey and football teams, and in his later years faithfully followed the Yankees and Chiefs. He was a lifelong summer resident of Norfolk, Connecticut, where his father’s family went back several generations, and where he enjoyed swimming and canoeing in Tobey Pond, hiking the surrounding forests and hills, and, even into his early 90s, scything a 10-acre field on the family property. He was also involved in a number of charitable organizations over the years, and was a devoted and longtime member of the University Church in Yale.
Ralph is survived by two sons, Ralph C. Burr, Jr. and his husband Andrew Cushing, of San Francisco and Norfolk, and Thomas F. Burr and his husband William Dobbins, of New York City and Norfolk, and four nieces and nephews. In addition to his wife, he was predeceased by his youngest son, Edward F. Burr, and by his brother, Charles M. Burr, Jr.
Private arrangements are in the care of BEECHER & BENNETT, 2300 Whitney Ave, Hamden. Donations to honor Ralph’s life can be made in memory of Edward F. Burr to the Muscular Dystrophy Association at www.mda.org.