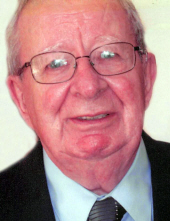 Ray L. Hughes, 88, husband of Frances McTrottes Hughes of West Haven, passed away January 18, 2020 at Masonicare after a brief illness. He was born in Tulsa, OK, a son of the late Forrest R. and Edith Root Hughes, and was a resident of West Haven. Ray proudly served in the US Air Force during the Korean conflict, stationed in Japan. He was employed with the CT Dept. of Labor for 28 years before retirement in 1987. Ray was a longtime member of the D.A.V. Chapter #18 of West Haven. He was the father of William Hughes of Meriden and Deborah Hughes of Waterbury. Friends are invited to visit with his family on Friday, January 24 from 1-3 p.m. at BEECHER & BENNETT FUNERAL HOME, 2300 Whitney Ave., Hamden. Interment will be on Friday, January 31 at 1 p.m. in Beaverdale Memorial Park. Memorial contributions may be sent to W.H.E.A.T., 674 Washington Ave., West Haven, CT 06516.