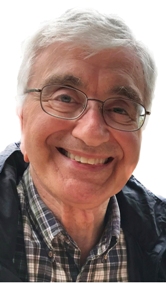 Raymond was born on October 30, 1941, in New Haven, CT. He was an only child but spent his youth with cousins who were more like siblings, and was part of a large extended family. He graduated from Southern CT State University in 1963 with BS & MS degrees in Art Education, majoring in intaglio printmaking. He and Ginny were married in 1970 and had over 50 years of love, marriage, and a shared faith. They were each others’ best friends. They liked to joke that Ginny gives the War & Peace version of a story, while he gave the Reader’s Digest version.

Ray taught Art at Dag Hammarskjold Middle School and Mark Sheehan High School in Wallingford for 24 years. Upon his retirement from teaching, he became a sales representative for American Sign Co. and Northeast Stamp Co. He also served as President and Treasurer of the New Haven Paint & Clay Club. He returned to teaching for 12 years as a Manual Skills instructor at the Northeast Blind Rehabilitation Center at the West Haven Veterans Hospital.

Ray was never one to sit for very long, so during retirement, he volunteered with the American Red Cross, was an active member of the St. Barnabas Social Action Committee, and acted as a Director on the board of The Commons at Mill River condominium complex. He and Ginny frequently traveled to pet-sit their daughter’s dogs and help fix up her house in Chicago; he was rarely photographed there without a dog on his lap. He loved connecting with his son in Colorado on everything from technology to home repairs to football to the latest good Netflix series. He visited family in Oregon, took an Alaskan cruise, and went to Italy several times with family and friends for trips that made his always big smile even brighter.

Ray could be quiet but he was the master of puns – they came very naturally to him and would often take his family by surprise, leaving them in stitches. He enjoyed baking – maybe you were lucky enough to get some of his babka or almond coffee ring. He was an enthusiastic do-it-yourselfer who never ceased to amaze and amuse his family with his creative solutions. He enjoyed jigsaw puzzles, and the sometimes hard-earned fruits of his labor can be seen in the condo and in the lobby of their building, with selections that reflect the changing seasons.

Above all, he relished his roles of husband, father, and friend. He enormously underestimated the impact he had on the lives and hearts of so many, but his family and friends did their best to help him understand. His oncologist told his daughter that he was “beloved” to all who got to know him over the course of his cancer treatments, and this makes sense – while no one is perfect, he was the husband and father and friend that so many people long to have.

A Mass will be held at the Church of St. Barnabas, 44 Washington Ave., North Haven on Thursday, January 20th at 12:00 Noon. Interment will be private. The family requests that you please wear a well-fitted mask over your nose and mouth at all times and appropriately distance so as to lower the risk of COVID-19 spread. In lieu of flowers, please send donations to the Saint Elizabeth of the Trinity Parish, Church of St. Barnabas, 44 Washington Ave., North Haven, CT, 06473. Please designate donations in honor of Raymond to the Social Action Committee.