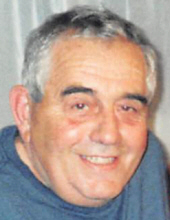 Raymond A. Sola, 84, of Hamden and also a 50 year summer resident of Amston Lake, passed away on November 8, 2018. Son of the late John and Rose Mary Trombotto Sola, he was born during a snowstorm on February 13, 1934 with Dr. Sterling Taylor of North Haven riding a horse and buggy to 2263 Whitney Avenue to deliver him at home. He was married for 714 months (59 1/2 years) to Janet Sinkiewicz Sola. Ray served during the Korean Conflict, deployed to the Bering Strait and was a member of American Legion Post 88, An avid fisherman, he was a member of the Central Connecticut Striper Club in Meriden, once having landed a 54 lb. striped bass. He attended Quinnipiac College and Central Connecticut. A partner in Sola-McKee Building Contractors prior to becoming the head carpenter for the Hamden Board of Education for 36 years, he also served as a Commissioner on the Town of Hamden Retirement Board. Father of Laurie Ann Ray (Donald) of Amston Lake, Lebanon, Raymond W. Sola Jr. (Pamela) of North Haven, Natalie Stock (Christopher) of North Haven, Janet Manukas (Rev. George) of Hamden, John Sola (Jennifer) of North Haven, and Helene Smith-Sola (Rigoberto) of Brooklyn, NY. Also survived by eleven grandchildren; Carrie Ray Kvasnik of Maryland, Lindsay Ray of NYC, Maria Manukas of Stamford, Andrew Stock of North Haven, Abbey Stock of New Orleans & North Haven, Joseph Stock of North Haven, twins Warren & Katie Sola of North Haven, Emma Sola of North Haven, Annie Manukas of Hamden, and Reymo Smith-Sola of Brooklyn, NY; his sister, Catherine McKee of North Haven, and nieces, nephews, a brother-in-law, two sisters-in-law, and many relatives in Pinerolo, Italy, and Cordoba and Santa Fe, Argentina. He was predeceased by his brothers Clement, John, and Mario. Friends are invited to visit with his family on Monday, November 12th from 4:00 to 7:00 p.m. at BEECHER & BENNETT, 2300 Whitney Ave, Hamden. His Memorial Mass will be Celebrated on Tuesday morning at 9:30 a.m. in Our Lady of Mt. Carmel Church, 2819 Whitney Ave, Hamden followed by interment with Military Honors in St. Mary's Cemetery.