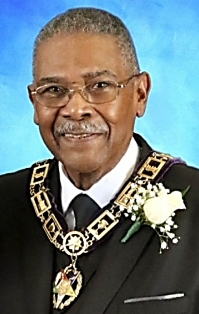 Raymond F. Johnson Jr., 79, of Meriden, loving husband of Kim Hardy-Johnson, passed away on December 21, 2021 at Hartford Hospital. Born in New Haven on October 6, 1942, a son of the late Raymond F. Johnson Sr. and Priscilla Miller Johnson-O’Neil, he is survived by his children; Raymond F. Johnson, III and his wife Jamie, Rae Ann Johnson, Antoinette Johnson, Jacqueline Johnson-Pouncey, Charlene Leslie, and Brendan Johnson, sisters; Justine O’Neil Haynes and her husband Otis, and Denise Burrows, stepchildren; Stephanie and Doreen Pouncey, Candiss Brooks, Hezekiah Gregory, III and his wife Jessica, and Jazmine Gregory, and a host of grandchildren, great-grandchildren, nieces and nephews. He was predeceased by his siblings; Ronald Johnson, John Anthony O’Neil, Debra King, and Elizabeth Stovall. Raymond retired from Stop & Shop in North Haven, where he worked for over 30 years until his retirement.
Raymond was very active and proud of the service he provided within the Prince Hall Masons. He was Raised as a Master Mason on March 22, 1980 in Widow’s Son Lodge #1, New Haven and later received an Honorary Past Master status. He served several years as a Grand Trustee for the MW Prince Hall Grand Lodge for the State of Connecticut; was a member of New Haven Consistory #7, and years later elevated to 33° Mason; was a Past Potentate of Arabic Temple #40, AEAONMS. Raymond joined Eureka Chapter #2, Order of Eastern Star, PHA in 1981, where he served as Worthy Patron in 1995 and 2011 and Grand Worthy Patron of Prince Hall Grand Chapter, OES from 2016-2018. He also enjoyed traveling the country playing in several men’s softball leagues. Above all else he enjoyed spending time with his family, who will all miss him dearly, especially during this holiday season.
Services are being privately held at the convenience of his family. Arrangements in care of Beecher & Bennett-Flatow Funeral Home, Meriden. Memorial Contributions in his name may be made to Special Olympics Connecticut, 2666 State St. #1 Hamden, CT 06517, or by going to www.soct.org.