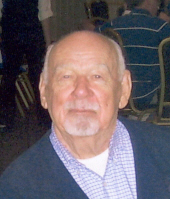 Raymond Frederick Chase, Sr. 88, husband of the late Josephine Macolino Chase, passed away Jan. 21, 2012 in Hospital of St. Raphael. Father of Raymond F. Jr. and his wife Angela Chase, of Cheshire, John M. Chase of West Burke, VT, David Chase of Hamptonville, NC, and Gregory and his wife Michele Chase of Glastonbury. Besides his children, he also leaves grandchildren, Raymond F. III and his wife Meghan Chase of Southington, Patrick and Christopher Chase of Cheshire, Brandon, & Mackenzie Chase of Glastonbury, Jessica Broadhurst and her husband, Brent, of Huntington Beach, CA, Kelli Chase of Huntington Beach, CA & Brooke Sprague of Troutdale, OR. He is also survived by his beloved longtime companion Audrey Giannattasio of North Haven. He was predeceased by his brothers Howard and Donald Chase. Mr. Chase was born in New Haven Feb. 22, 1923, a son of the late Charles and Mary DeSantes Chase and had resided in Hamden for many years before moving to North Haven in 2001. He attended Junior College of Commerce in New Haven and served in the US Navy Air Corps as a pilot during WW II and was employed as a territory manager for the Campbell Soup Co. for 38 years prior to his retirement in 1986. Raymond was active in Hamden town affairs and was a longtime Town Councilman in District # 1. He was a communicant and an usher at Our Lady of Mount Carmel Church, a member of the Hamden Elks B.P.O.E. # 2224, the American Legion Post # 88, and the Civitan Club. Funeral from BEECHER & BENNETT, 2300 WHITNEY AVE, HAMDEN Thursday morning, Jan. 26, at 9:30. Mass of Christian Burial in Our Lady of Mount Carmel Church at 10 a.m. Friends may call Wednesday evening from 6-8 p.m. Interment with Naval Military Honors in Centerville Cemetery.