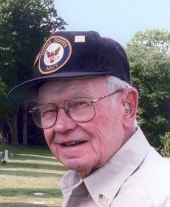 Raymond G. Hard, age 83, of Boylston St. Meriden, passed away March 1, 2010 at Gaylord Hospital. Raymond is the husband for 63 years of Shirley M. Delmore Hard. He is the father of Raymond V. Hard & his wife Patti, Michael J. Hard, Shawn J. Hard & wife Kelley, all of Meriden; grandfather of Michael F Hard, Kasie R. Hard, Sean D. Hard, Jeffrey Hard & Jacob D. Hard; great grandfather of Gavin McGray & Chloe Noyes. Ray was predeceased by his son David E. Hard, and brothers, William & Edwin Hard. Born in Peekskill, NY on April 16, 1926 he was a son of the late Raymond B. & Margaret Burke Hard. A graduate of Hendrick Hudson High School in Montrose, NY in 1944 and then served in the US Navy from 1944 to 1946 with the 144th Naval Construction Battalion (Seabees) as S/K3/c on Guam, Marianas Islands, during WWII. Ray was a radio broadcaster from 1957-1978 at five Conn. Radio & TV stations, with experience as announcer, both on & off camera, sales & station manger as well as New England Regional Director of Nat'l Assoc. of FM Broadcasters followed by 2 years as Executive Secretary of CT Broadcasters Assn. & several adult education non-credit courses re: PR, Sales etc. He was a Sales Counselor for 14 years for the Catholic Cemeteries Assoc. working with the Archdioceses of Hartford, the Orthodox Greek Diocese of Baltimore, MD & a short time in Chicago. He has writing experience consisting of Hard Times, The Hard Family Newsletter as well as 4 books on: Profitable Flea Marketing, Making Final Arrangements, Profitable Non-Profit Auctions & Per Inquiry Advertising in addition to lots & lots of newscast. Ray ended his working years as a school bus driver & crossing guard. He was a member of the Antique Veterans, the Knights of Columbus, Quarter Master for Post 585 in Meriden & a member of the 'BOOBS'- Bunch Of Old Broadcasters. Relatives & Friends may attend his Funeral on Saturday, March 6, 2010, at 10:00 AM in BEECHER & BENNETT-FLATOW FUNERAL HOME, 48 Cook Ave. Meriden. with Military Honors at the Funeral Home. His family will then continue to receive friends untill 12:00 noon at the funeral home. Interment will be private.