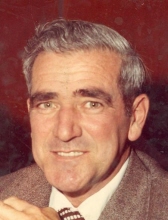 Meriden - Raymond J. Alix , 84 husband of Winifred (Anderson) Alix passed away on Thursday, August 13. 2009 at MidState Medical Center. He was born August 31, 1924 in Meriden a son of the late Joseph and Jane (Dowling) Alix. He attended Meriden Trade High School now Wilcox Technical School . He retired after 42 years with CT. Light and Power/Yankee Gas. Ray was a member of Holy Angels Church, Meriden Civil Defense Club, the Elks Club and the Knights of Columbus. He proudly served his country during WWII in the U.S. Army. He was the best husband, dad and grandfather who will be deeply missed. In addition to his wife Winifred of 62 years he is survived by two daughters, Jeanne Blondeau of Meriden and Jane and her husband Roland Rancourt of Meriden, two sons and their wives, Raymond F. and Lois Alix of Southington and Steven and Evelyn Alix of Meriden, a sister; Frances Conroy of Florida, six grandchildren and one great-grandson. He was predeceased by several brothers and sisters. A Mass of Christian burial will be celebrated on Monday, August 17, 2009 at 10:30am at St. Laurent Church, Camp St., Meriden. Burial will follow at St. Laurent Cemetery, Meriden. Relatives and friends may call at the Beecher & Bennett-Flatow Funeral Home, 48 Cook Ave., Meriden on Monday from 9-10am, prior to the service. In lieu of flowers donations in Raymond's memory may be made to the American Heart Association, 5 Brookside Dr., Wallingford, CT 06492 or to the American Cancer Society, P.O.Box 1004, Meriden, CT 06450.