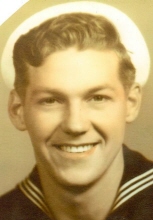 Meriden- Raymond M. Konopka Sr., 77, husband of the late Jane(Zimmerman)Konopka passed away peacefully at his home on Wednesday, August 15. He was born August 31, 1929 in Middletown, CT a son of the late Frank Konopka and Stella Nurczyk Konopka. Mr.Konopka was a great carpenter, a true craftsman of the trade. He was a Veteran having served in the U.S. Navy, a lifetime member of the American Legion Post #45 and a member of the P.L.A.V. of Meriden. He was a devoted husband, father and grandfather who will be deeply missed. He is survived by his five sons and their wives, Ray and Carol Konopka Jr. of Meriden, Ed and Kelly Konopka of Durham, Paul and BettyJane Konopka of Yalesville, Thomas and Sharon Konopka of Meriden and Richard and Sonia Konopka of Middletown, seven grandchildren, Kevin, Kelly and Kyle Konopka, Tyler, Riley, Connor and Logan Konopka and one great grandson Nathan Laub. He is also survived by two sisters, Regina Petrosky of Middletown and Shirley Mroczka of Meriden and several nieces and nephews. He was predeceased by a brother Frank Konopka and a sister Veronica Mock. A funeral service will be held on Saturday, August 18 at 10:30am at the Beecher & Bennett-Flatow Funeral Home, 48 Cook Ave., Meriden. Burial will follow at the State of CT Veterans Cemetery, Bow Lane, Middletown. Relatives and friends may call at the funeral home on Saturday from 9-10:30 prior to the service. In lieu of flowers donations may be made to V.F.W. Foundation, Suite 514, Kansas City, MO 64111.