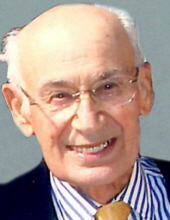 Renato John 'Bot' Bottino, 94, passed away peacefully on Saturday, February 15, 2020. Born in Torino, Italy to the late Mario and Olimpia Bovone Bottino on July 11, 1925. He was a long-time resident of Bethany and Hamden. R. John was married for 60 years to the love of his life, his wife Sally, and they raised two sons. A graduate of Hamden High School, he played on the 1943 district championship hockey team. He was a decorated veteran of the Army Air Corps, earning the Good Conduct Medal and achieving the rank of technical sergeant in World War II while serving as the radio operator on the Duration Plus, a B-17 bomber stationed in England, Germany, and Africa. Post war, Renato earned degrees from the University of Bridgeport and Quinnipiac College. Throughout college, he worked for J. Press Clothiers in New Haven, and enjoyed skiing, golf and sailing. He was a career industrial engineer at Pratt and Whitney Aircraft for 35 years and enjoyed a long retirement of 30 years. Renato was an avid automobile enthusiast belonging to the Alfa Romeo Owners Club for 44 years and prior the Jaguar Club. He was a member of the original Woodbridge-Bethany Fathers Hockey Association, and traveled all over the Northeast devotedly supporting his sons' youth, high school, and college teams. Bot and Sally wintered in Florida for 12 years and twice honeymooned in Bermuda and toured Northern California. He was an avid reader and an encyclopedic music and sports fan, especially of Sinatra, the UCONN Huskies, New England Patriots, and F1. Renato was predeceased by his wife and is survived by his two sons, John A. Bottino of Meriden, and Paul B. Bottino of Auburndale, MA; and his loving granddaughters, Sarah and Ava Bottino, also of Auburndale, MA. The family would like to thank Lisa Cacace for all her love and caring of dad during his last years and the hospice nurses at MidState Hospital. A Memorial Mass celebrating Renato's life is being planned for the near future and will be announced accordingly. BEECHER & BENNETT, 2300 Whitney Ave., Hamden in care of arrangements.