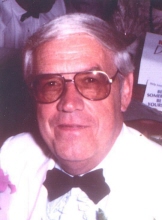 Rene Harry Tompkinson, 90, of Spring Meadow, Elim Park, Cheshire, formerly of Meriden and Stoddard, NH passed away on February 15, 2018. He was the beloved husband of Esther Benson Tompkinson and they celebrated their 67th anniversary on August 15, 2017. Rene was born in New Haven on July 6, 1927, son of the late William H. and Helen Truchot Tompkinson. He had been a resident of Meriden since early childhood, attending local schools, graduating from Meriden High School Class of 1945 and later from Western Pennsylvania Horological Institute in Pittsburgh, PA with a degree in Horology. He continued his education with the American Watchmaker’s Institute and was awarded a certificate as Master Watchmaker in 1960. Rene was a veteran of World War II, having served as a torpedo man in the Navy Submarine Service in Balboa, Canal Zone, Panama, as well as the PT boat facilities in Melville, RI. As a Master Watchmaker, he owned and operated The Time Shop in Meriden since 1950, retiring in 1996. He was an active member of the National Association of Watch and Clock Collectors, as well as the Connecticut and Massachusetts Chapters, and was a member of the American Watchmakers Institute. He was a member of the Meriden Jaycees for many years and was named outstanding State Director in 1960. He joined the Meriden Lions Club in 1962, served through the chairs and was elected President in 1967. Rene was also President of the Meriden Lions Welfare Projects for 12 years and Treasurer for 13 years. He was honored as 1986-1987 Lion of the Year; inducted as a Melvin Jones Fellow in 1988; and awarded a Life Membership in 1990 by the Meriden Lions. He served in many offices of the International Association of Lions Clubs and was elected to serve as District Governor in 1987. He was inducted at The Lions International Convention in Taipei, Taiwan. Upon completion of his term of office, he was honored with the 100% District Governor’s Award and three outstanding Leadership Awards from Lions International. Rene had been very active in the Connecticut Lions Eye Research Foundation for many years. He had been a Corporator of the Oak Hill School for the Blind since 1992. In 2001-2002 he served as Chairman of the Y’s Men of Meriden. He was also a member of the Meriden Arts and Crafts Association and The First Church of Christ Scientist in Boston, MA. Rene truly enjoyed fishing, boating and snowmobiling at their cottage in Pickerel Cove on Highland Lake in Stoddard, NH for 23 years. He also enjoyed working with wood and made many gifts for his grandkids and friends. Besides his wife, Rene is survived by his daughter Sandra and her husband Marshall Dennis of Ashburnham, MA; son Mark and his wife Cheryl Tompkinson of Ephrata, PA; and five grandchildren Joshua and his wife Katherine Dennis, Ian Dennis, Amanda and her husband Joel Bernard, Alicia and her husband Eric Steinhauer, and Brian and his wife Tiffany Tompkinson; two great grandsons Blake and Quentin Tompkinson; and many cousins. Relatives and friends are invited to a memorial service for Rene on Saturday, March 3rd at 1PM at the Elim Park Chapel, 150 Cook Hill Road, Cheshire, CT. Memorial donations in Rene’s name may be made to the Fidelco Guide Dog Foundation, PO Box 142, Bloomfield, CT 06002, or C.L.E.R.F., 330 Cedar Street, PO Box 9268, New Haven, CT 06533, or Elim Park Benevolent Fund, 150 Cook Hill Road, Cheshire, CT 06410.