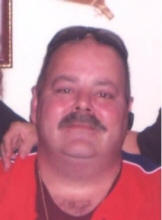 Meriden- Rene J. Simoneau, 50, beloved husband of Rosemary Rivera passed away peacefully on Tuesday, January 14, 2014 at home surrounded by his family. He was born August 28, 1963 in Meriden a son of the late late Rene J. and Doris (Wyman) Simoneau Sr. Rene was a devoted husband, father, brother, uncle and friend. He donated his time to many charities, most commonly playing Santa Claus for those less fortunate and collecting and distributing toys for Toys for Tots. He owned his own landscaping business, was the Manager of the South Meriden Car Wash, was a parishioner of St. Joseph Church, had a love for country music and his Steelers Football. In addition to his wife Rosemary, he is survived by three sons; Jay Agli, Ryan and Dylan Simoneau all of Meriden, his brother Richard Simoneau and wife Andrea, seven sisters, Rachel, Irene, Paula, AnnMarie and Priscilla Simoneau and Nancy Dontigney and Karen Lodola, two special nephews, and niece, Timothy Dontigney, Justin Simoneau and Ashley Simoneau as well as many cousins, nieces and nephews. He was predeceased by his brother Robert Simoneau. A funeral will be held on Monday, January 20, 2014 at 9:30am at Beecher & Bennett-Flatow Funeral Home, 48 Cook Ave., Meriden followed by a Mass of Christian Burial at 11 am at St. Joseph Church, West Main St., Meriden, Burial will follow in Sacred Heart Cemetery, Meriden. Relatives and friends may call at the funeral home on Sunday, January 19 from 4-8pm.