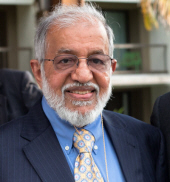 Cherukara Varghese Thomas, 'Tom,' age 76, of Cromwell, Connecticut passed away on January 13, 2016. He was born in Kerala, India, on August 5, 1939, the youngest of eight children. His father C.V. Varughese was a farmer and businessman of the Kadamula family. His mother Rachael (née Mathew) was well-liked and respected, a schoolteacher of the Kurianoor Valikalayil family. She died when he was three, and his sisters and a maternal aunt raised him. He entered Madras Christian College (MCC, Heber Hall) in 1959 and was active in the Student Christian Movement (SCM). His future wife, Jessy, attended the nearby Women's Christian College. Both attended an SCM retreat in 1961 with the missionary surgeon, Dr. Paul Brand. After MCC, he continued education, studying first at Serampore College in West Bengal and then at the United Theological College in Bangalore to obtain a Bachelor of Divinity. He married Jessy in 1966, and they had two sons, Prem and Prakash. The Mar Thoma Church in Kerala ordained him and then appointed him as overseer for all youth ministry in the denomination. The church also sponsored further education at Princeton Theological Seminary where he obtained a Master's degree. After returning to India, he served in the Mar Thoma church and conceived and carried out the construction of a Christian Education Center. In this he displayed a characteristic flair and eye for landscape and property development. Later, he worked with the National Christian Council of India based in Nagpur. In 1976, after receiving an appointment as pastor to the People's United Methodist Church in Newport, Maine, he and the family immigrated to the United States. While there, the family received a visit from Dorothy Clarke Wilson, biographer of Dr. Brand. From 1978 to 1985, he served the Lisbon United Methodist Church in Lisbon Falls, where he facilitated the merger of two churches. While at Newport and Lisbon, he also ministered in neighboring towns. His last parish before leaving Maine was the Calvary United Methodist Church in Lewiston. During these appointments, he continued further education and wrote a dissertation on church merger. The Boston University School of Theology awarded him a doctorate (D.Min.) in 1987. He was pastor to four congregations in Massachusetts: New Bedford, Taunton, North Attleborough, and Wayland. Throughout his ministry, he was known for his bright smile, dedication to his parishioners, and energetic administration. He and Jessy regulary extended hospitality toward parishioners and friends who shared many meals and celebrations in their home. He was an avid gardener and landscaper with a green thumb that doubled the size of garden yields compared to many other enthusiasts. Earlier in life, he enjoyed bodybuilding for which he won collegiate recognition. Since his youth he had a keen interest in politics and political discussion and read widely. After retiring, he and Jessy moved in 2005 to North Haven, CT where they enjoyed nurturing six grandchildren. After Jessy's death in 2015, he resided at the cheerful, welcoming, and supportive retirement community at Covenant Village of Cromwell where he began to develop many friendships before he fell ill. Tom is survived by two sons Prem (Lisa) and Prakash (Shari), and 6 grandchildren (Ezra, Benjamin, Abraham, Moriah, Gabriel, and Eva). Of his siblings, he was predeceased by brother C. George Verghese, and sisters, Mary Thomas and Kunjamma Eapen. Surviving are sisters, Thankamma Philip, Annamma Abraham, and Susamma Philip; and brother, Mathew C. Varghese.