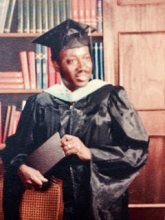 Reverend Jeff Dyous, a high school teacher, ordained minister, and a resident of Hamden, CT, passed away on December 30, 2016 at the age of 86. Reverend Dyous is survived by his wife, Marlin, his son, Randall, and two children from a previous marriage. Reverend Dyous was born in Preston, Georgia, on February 7, 1930 to Maggie Brown and Hollis Dyous. He graduated from Southern Connecticut State University in 1974 with a degree in Sociology and went on to earn a Master of Arts degree in Education. He continued with his education and secured his Sixth-Year Degree. He taught in the New Haven public school system for twenty years. He also studied at the Yale Divinity School from 1969 to 1970. Reverend Dyous was a wonderful husband, father, and educator. He was married to his wife and best friend, Marlin, for forty-three wonderful years! He believed faith and prayer was as essential as oxygen. He said he had a '…calling from the lord...' and in 1969 preached his first sermon, on march 16th of the same year. BEECHER & BENNETT FUNERAL HOME, 2300 Whitney Ave., Hamden is in care of arrangements.