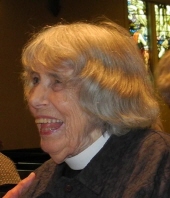 Rev. Joan B. Horwitt, age 90, of Hamden, passed away on September 19, 2014 from complications following a stroke. Her family was with her when she passed. Joan was born in Wyncote, PA on January 25, 1924, a daughter of the late John O. Bower MD & Armorel Dixon Bower. Joan was in the front lines of the struggle to get the Episcopal church to accept women into the priesthood. She graduated from Yale Divinity School in 1977. In 1979 she became the first woman to be ordained by a Connecticut Bishop: the Reverend Morgan Porteus, then joined Christ Church in Ansonia, CT as a curate. In 1982 she became priest-in-charge at St. John's in Sandy Hook, CT. She retired from full-time ministry in 1989 but continued her service to others as an interim priest. From 1995 to 1997 she served as full-time, priest-in-charge at St. John's Episcopal in North Guilford. She last served, unofficially, at St. Paul's (now St. Paul's/St. James) in New Haven, where she built the fledgling Clothes Closet into the substantial provider to the poor and needy that it is today. Joan is remembered, loved and revered by her family, former parishioners and fellow clergypeople for her strength, courage, intelligence, dry wit and humor, and most of all for her unflagging energy and determination to help those in need: spiritually, emotionally, and physically. She is survived by her daughter Elisabeth Horwitt-Putnam & her husband Robert and son JP; her daughter Jane Horwitt-Alter & her husband Marc & their daughter Rosie; her son Jed Horwitt & his wife Dorota & their children Katarzyna and Wojciech Lesniak; her brother Robert Bower MD; and nieces and nephews Leslie Kux, Sally Kux-Weiner, Holly Bower, Brian Kux & Daniel Bower. Joan was predeceased by her sisters Jill & Molly Bower and her brothers Jack & Ted Bower. Friends are invited to attend her Memorial Service held on October 4, 2014 in the Episcopal Church of St. Paul & St. James, 57 Olive Street, New Haven CT 06511 at 11:00 AM officiated by Bishop Arthur Walmsley. Her internment will be private with her family. Arrangements are in care of BEECHER & BENNETT FUNERAL HOME, 2300 Whitney Ave, Hamden. Contributions in her memory can be made to Loaves & Fishes Food Pantry or Clothes Closet, sent to; The Episcopal Church of St. Paul & St. James, 57 Olive St, New Haven, CT 06511.