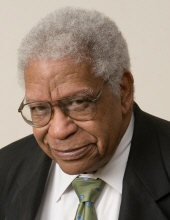 A service celebrating the life of The Rev. Dr. Samuel Nathaniel Slie will be held Saturday, March 23, at 12:30pm, in Battell Chapel, in New Haven, where for decades he served as Associate Pastor of The Church of Christ in Yale University. A much beloved pastor, a friend to thousands, and a beacon for interfaith cooperative ministry, Sam died peacefully at the age of 93. The son of Annie Brown Slie and Robert E. Slie, Sam grew up in New Haven's Oak Street neighborhood, which he recalled fondly as a 'beautiful mixture of everybody - Italian, Irish, Polish, Jewish, Black, Portuguese.' As a youngster, Sam became, in his words, a 'Shabbat goy,' climbing on a chair to turn off the lights of the two synagogues on his block. 'We were all part of one another's lives.' After graduation from Hillhouse High School, Sam completed a semester at Springfield College before being drafted into the then-segregated US Army. There he served in the Buffalo Brigades sent to liberate Tuscany, Italy, in a brutal campaign. His war experience led Sam to see the complexity of prejudice; he discovered that his expansive acceptance of different people was not shared by all. Sam was honorably discharged in 1946 but remained longer in Italy, where he developed a love for all things Italian, gaining life-long friends and fluency in the language. He returned to the US questioning the value of human life in the contexts of war, power and race. 'Why did some people have the power to not send their sons,' Sam questioned, 'but send me instead? Why was I one of the 'easily draftable' people? I was no longer enamored with the American systems and in many ways I felt like a pawn.' Returning to Springfield College to complete his undergraduate studies, Sam met conscientious objectors, many of them Quakers. Long talks with them about the meaning of life inspired him to attend Yale Divinity School. He graduated from there with a Bachelor of Divinity degree in 1952 and was ordained promptly to the Christian ministry at Dixwell Avenue Congregational United Church of Christ, in New Haven. Sam then returned to his beloved Italy to work on post-war reconstruction with the American Friends Service Committee, first as a volunteer and thereafter as a co-leader. In the course of many summers, Sam led AFSC work camps, rebuilding roads, sewers, schools, and bell towers throughout Italy. 'I saw this work,' Sam said, 'as an opportunity for participants to build a lifetime spirit of peace, unity, and love for humanity.' That he did, in the course of which he developed a lifetime relationship with the Tuscan village of Cogna, which he continued to visit for decades. The Heads of Family of Cogna even appointed Sam its 'Honorary President of all public works which will be undertaken by the community, as we are certain that he will always be our friend and collaborator.' Through his decades of ministry, Sam served in many positions, including: Southern Area Secretary with the National Student Council of the YMCA; Regional Director of the New England Student Christian Movement; Coordinating Chaplain of the United Ministry in Higher Education in New Haven; and Protestant Chaplain at Southern Connecticut State University. He also served as Associate Pastor of The Church of Christ at Yale University while Rev. William Sloane Coffin was Yale's Chaplain. During that time Sam helped to start the Black Church at Yale. He continued as an Associate Pastor of the Church of Christ at Yale and since 2005 had been Pastor Emeritus of Shalom United Church of Christ. Sam was a Fellow of Yale's Morse College. He also served as a member of the board of Yale's Dwight Hall, which appointed him Emeritus Board Member in recognition of his legacy and invaluable contributions. A man of deep faith and inquiring intellect, Sam pursued additional degrees, earning a Master in Sacred Theology from Yale Divinity School in 1963 and in 1985 a Doctor in Ministry from New York Theological Seminary. Sam was deeply rooted in the Congregational tradition and for several years taught United Church of Christ polity at Yale Divinity School. Sam also served as Coordinator of the Downtown Cooperative Ministries, an ecumenical association of Christian churches, which spawned New Haven social service agencies such as Columbus House and the Greater New Haven Community Loan Fund. Committed to the widest possible embrace, Sam convinced the DCM board to expand its vision and mission to welcome all faiths and to become Interfaith Cooperative Ministries. Sam skillfully laid the groundwork for this new organizational identity by hosting a series of brown bag luncheons called 'Shalom People,' to which he invited non-Christian clergy from the area. As Herbert Brockman, Rabbi Emeritus of Congregation Mishkan Israel, recalls, Sam's strategy was to get people comfortable enough with each other that the transition would feel natural. Slie, observed Brockman, was 'very sly.' Sam's body now rests in New Haven's Grove Street Cemetery. He is survived by his cousin, Dorothy Jennings Ramdayal, of Ocala, Florida, whose daughter Josephine ('Phina') Tuttle was a constant presence and help in Sam's later life until the end. In a real and enduring way, Sam is survived also by family that circles the globe: his Godchildren, his parishioners, his students, his colleagues, those he baptized, those at whose weddings he officiated, those he counseled and those he inspired. As so many have commented on learning of his death, Sam was truly a saint in his time, a beloved pastor, a prayer man extraordinaire, and a great human being. We have been blessed by this man of amazing grace. Well done, good and faithful servant! Contributions may be made to the Rev. Dr. Samuel N. Slie '52BD, '63STM Internship Fund, c/o Yale Divinity School, 409 Prospect St., New Haven, CT 06511.