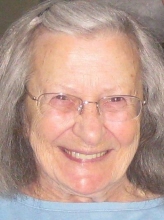 Rhea Maine died Saturday, June 4th in New Haven, CT. Born on April 15, 1917 in Ware, MA, to Hyacinth and Nelida Poulin, Rhea was the youngest of nine children. A wife and widow to both Daniel Walsh and James Maine, she was predeceased by her daughter, Mary-Ellen Ryan, and her son, Donald Walsh. Remarkably independent, Rhea worked in factories from her adolescence into her 70's. Rhea lived throughout the East Coast, from Nashville, TN, to Providence, RI, until she settled in her longtime home in East Lyme, CT. Her passions included reading murder mysteries, long walks, occasional forays into dive bars, speaking French, telling bawdy jokes, watching foreign films, and dining with her family at Modern Pizza. She had a special connection with hard-working people and would always say something that would brighten their day. Her disarming sense of humor and playful flirtiness made an impression on everyone she met. Rhea will be remembered for her quick wit, charming smile, and infectious laugh. Known to her family as Memere, she is survived by grandchildren Adam Ryan, his wife Beth, and their children, Ella and Cole; Cybil Ryan, Caitlin Ryan, Ethan Ryan, and Colin Ryan, and their father, Michael Ryan. Her Graveside service will be held at 2 p.m. on Tuesday, June 7th at St. Lawrence Cemetery in West Haven, CT. Arrangements are in care of BEECHER & BENNETT FUNERAL HOME, 2300 Whitney Ave, Hamden.