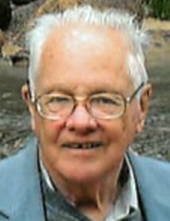 Richard Arnold 'Dick' Mann, 97, of New Haven, passed away at the Mary Wade Home on October 3, 2019. Born in Lake Geneva, WI on December 15, 1921 to the late Freeman and Althina Arnold Mann; Dick will be remembered by his wife of 53 years, Dolores Peck Mann; son, Robert Mann and his wife Margaret of Springfield, NJ; and granddaughter, Jillian Mann of Springfield, NJ. He was predeceased by his brother, Freeman Mann, Jr. After growing up in Wisconsin, Dick received his PhD from the University of Wisconsin in Madison. During WWII he worked at NACA as a Mechanical Engineer in a civilian role. He found his passion when he became an instructor at the University of Wisconsin where he taught Engineering. After moving to New Haven he was a professor for 21 years at the University of New Haven, teaching Computer Science and Engineering. Dick was a man of many talents, having published two college textbooks, handmade his Christmas cards for over 60 years, decorated Ukrainian Easter Eggs, and made folk art. He also enjoyed reading, opera, theater, genealogy, and exploring covered bridges in New England. Traveling the globe and making countless memories with his wife was probably his greatest enjoyment. Dick was a quiet man, but he was known for always treating everyone with decency and respect. His family would like to thank the staff at St. Raphael Hospital, the Mary Wade Home, and the Linden of Woodbridge for their wonderful care over the course of Dick's illness. Friends are invited to visit with his family on Tuesday, October 8th from 4:00 to 6:00 p.m. at BEECHER & BENNETT, 2300 Whitney Ave., Hamden. Burial will be private. Contributions in Dick's memory may be made to the charity of your choice.