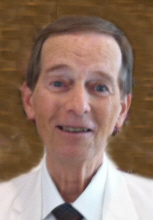 Richard Alan 'Dickie' Burkle, 68, of Hamden, loving husband of Sharyn Burkle, passed away peacefully with his wife by his side on Sunday September 27, 2015, after a couragous battle with cancer. He was born in New Haven on March 22, 1947 to the late Frederick and Mary Borel Burkle. Richard is survived by his two daughters Denise Ricker and her husband Peter of VT, Kimberly Smith and her husband Tom of MA, sister Joan Walsh and her husband Bob of Oxford CT, brother Dr. Frederick 'Skip' Burkle and his wife Phyllis of HI, grandchildren Jessica, Tyler, Sara, Jake and Cameron, along with several nieces and nephews. After graduating from North Haven High School in 1965 he worked as a manager of McDonald's and then went on to work as a truck driver for UPS. After retiring he moved to Hawaii where he enjoyed studying meteorology as a favorite pasttime and hobby. He also took a great deal of pride rescuing greyhounds and putting them into loving homes. After moving back to CT, the love story that began in 1962 with Dickie and Sharyn began once again in 2011, with long phone calls from Hawaii for 4 years. Dickie returned to CT to marry Sharyn, May 9, 2015. Twenty weeks ago this story captured the attention of Jill Konopka, Reporter at WFSB News 3. Jill shared their love story and wedding on May 9, 2015 on the WFSB News 3. Dickie and Sharyn laughed at being 'Celebrities,' as they were recognized 2 days later at Smilow Cancer Hospital. To all who knew Richard, knew he was a loving, humble, hard working, gentle soul, that was taken away from us way too soon. His family would like to truly thank Vitas Hospice for their care and compassion during his final weeks. They ask that donations in his name be made to the Vitas Community Connection by visiting https://pay.usbank.com/default.aspx?id=VITAS_Community_Conn or to Retired Greyhounds as Pets, REGAP, P.O. Box 3814 Woodbridge, CT 06525. To share a memory or on-line condolence with Richard's family please see: www.beecherandbennett.com