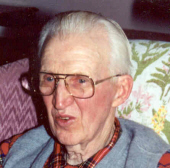 Richard Alva Warner, 88, life long resident of Hamden, husband of the late Jean Robinson Warner, passed away at his home on March 19, 2010. He was born in Hamden on April 10, 1921 to the late Everett and Jennie Warner. Richard is survived by his daughter Cynthia Strickland and her husband William of North Haven; son, Mark Warner and his wife Glenda of Riverview, FL; granddaughter, Karilyn Mackey and her husband, William of West Hartford. He was predeceased by six siblings: Ethel Giering-Foy, Vella Corey, Myrtle Corey, Edna Blanchard, Milton and Roy Warner. Richard grew up on his family's farm and continued to farm the land until 1948. After which he resided in Texas for a short time, but moved back to Hamden where he worked construction and did carpentry, most recently for the maintenance department at SCSU. Richard was a highly skilled handyman who derived great pleasure from fixing things and was always ready to lend a hand when called upon. He served as a volunteer firefighter for many years with the Dunbar Hill Volunteer Fire Dept. A Memorial Service will be held at BEECHER & BENNETT, 2300 Whitney Ave., Hamden, on Wednesday, March 24th at 2 p.m. followed by a burial in Hamden Plains Cemetery. Friends may visit with the family prior to the service from 1 to 2 p.m. at the funeral home. In lieu of flowers, memorial contributions may be sent to the Dunbar Hill Volunteer Fire Dept., 480 Dunbar Hill Rd., Hamden, CT 06518 or the American Red Cross, 703 Whitney Ave., New Haven, CT 06511.