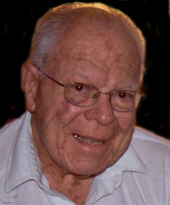 Richard Boyer Hansen, 82, beloved husband of the late Lois Clark Hansen, passed away suddenly at home February 7, 2009. He was born in New Haven February 25, 1926 a son of the late Frederick and Mildred Boyer Hansen and had resided in North Haven for 46 years before moving to Hamden in 2003. He served in the US Navy during WW II in the Pacific aboard the LST 1122, received a BA from the University of Connecticut, and a MBA from the Wharton School of Business. He joined the TM Byxbee Co. in 1952 and retired as managing partner in 1988. He was a member th the CT. Society of CPA's since 1953, and the New Haven Country Club since 1952. He enjoyed golf, and spending time with his family at Crystal Pond. He is survived by his 3 loving children and their spouses, Deborah Hansen Oftedal and Richard Oftedal of Salem, NH., Douglas C. Hansen and Elisabeth Travers of North Haven, Mark R. Hansen and Katherine Hansen of North Haven, 7 grandchildren, Susan Petcher, Randall & Andrew Oftedal, Russell & Scott Hansen, Christopher & Elizabeth Hansen, 2 great grandchildren Cole Bergstrom and Emily Petcher. Mr. Hansen was predeceased by his brother Robert F. Hansen. He is also survived by his devoted caregiver Doris Nkatia. His family will receive relatives and friends Wednesday Feb. 11, from 5-8 p.m. at BEECHER & BENNETT 2300 WHITNEY AVE. HAMDEN. Interment in Beaverdale Memorial Park will be private. In lieu of flowers memorial contributions may be sent to CT. Hospice 100 Double Beach Rd. Branford, CT 06405.