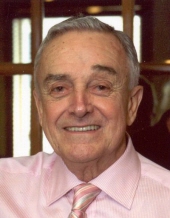 Richard 'Dick' Charles Verneris, 82, beloved husband of 47 years to Diane Dumelin Verneris, of Wallingford, passed away at his home on February 25, 2009 after a long illness. He was born in New Haven on August 23, 1926 to the late Harold and Edith Borghi Verneris.Besides his wife, Dick leaves his sons and daughters-in-law, Dr. Michael and Erin Verneris of Minnetonka, MN, Marc and Marga Verneris of Cheshire, and Matthew and Lisa Verneris of Hamden. Grandchildren, Hailey, Jacob, Hannah, Zachary, Drew, Willy, and Nicholas; his brother Arthur Verneris and his wife Irene of Hamden, many nieces and nephews, and his sister-in-law Nancy Daniel of North Haven who was especially helpful to Diane and Dick during the last five months. He was predeceased by a brother and sister-in-law Donald and Joyce Verneris.Dick grew up in Hamden and as a teenager enjoyed caddying at the Meadow Brook golf course and was an Air Warden during WWII. In 1944 he joined the Navy and became a SeaBee. While in the Pacific and proudly serving his country he was stationed in Guam. In 1948 Dick and his brother, Art, started Rainbow Cleaners, which now has two locations in Hamden. He is a past President of the New Haven Dry Cleaners Association. When Dick was not working at the cleaners he loved fishing and boating on Lake Okeechobee where he owned a condo. He also had a passion for making home made pasta, sharing dinners with friends and spending time with his family. He will be remembered for his gift of loving and enjoying people and all the great times he shared at Cape Cod, winters in Florida, and Italy and France with family and friends. Dick's family would like to thank the nurses at Hospice; Sister Michelle Bisaillon, Linda Baldwin, Caroline Musmano, Cheryl Smith, and a special thank you to Fred Imbimbo for all his help the past few months.Funeral from BEECHER & BENNETT, 2300 Whitney Ave., Hamden Saturday, February 28th at 9:30. Mass of Christian Burial at Our Lady Of Mt. Carmel Church at 10 a.m. Friends may visit with the family on Friday evening from 4-8 p.m. In lieu of flowers memorial contributions in Dick's memory may be sent to Children's Cancer Research Fund, 7801 East Bush Lake Rd., Suite 130, Minneapolis, MN 55439 or CT Hospice, 100 Double Beach Rd., Branford, CT 06405.