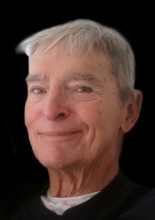 Meriden - Richard (Dick) M. Bennett, 77, beloved husband of 57 years to the late Rosemary (Cirillo) Bennett died after a courageous battle with cancer on Monday February7, 2011 at the Village at Kensington Place. He was born March 9, 1933 in Meriden a son of the late Laura Sargeant and Frank and Harriet (Ellison) Bennett. Dick proudly served his country in the U.S.Navy during the Korean Conflict. He graduated from General Motors Institute with a degree in engineering and worked for Pratt & Whitney Aircraft for more than 30 years, retiring in 1994. He was a lifelong resident of Meriden until he and his wife retired to Ft.Myers, FL. While there he was an active member at McGregor Baptist Church and was involved extensively with volunteering in the church and community. Dick is survived by three daughters; Karen Zealor of Wallingford, Tammy Borchet of Meriden and Tracy (Fred) Andrulat of Wallingford six grandchildren, Zachary, Rachel, Richard and Christopher and Christina and Alec, a brother Raymond (Rita) Bennett of California, brothers and sisters-in-law, Lillian Ianuzzi, Paul Cirillo, BettyJane(Edward) Asplund, Ceil Cirillo, Frank (Elizabeth) Cirillo and Esther Cirillo, a foster son, Brian Spak as well as several nieces and nephews. He was predeceased by two brothers, Walter and Frank Bennett and a brother-in-law, John Cirillo. A funeral will be held on Friday, February 11, 2011 at 10 am at the First Baptist Church of Wallingford, 114 North Main St., Wallingford. The Rev. Bruce Sandy will officate. Everyone is asked to go directly to the church. Burial will be at the convenience of the family. Relatives and friends may call at the Beecher & Bennett-Flatow Funeral Home, 48 Cook Ave., Meriden on Thursday (TODAY) from 4:30pm to 7:30pm. In lieu of flowers donations may be made to the First Baptist Church of Wallingford, Richard and Rosemary Bennett Scholarship Fund, 114 North Main St., Wallingford, CT 06492.