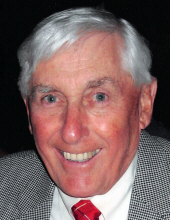 Richard E. Parks Jr. of Hamden, CT passed on December 14, 2018 after a 16 year battle with cancer. He was born in New Haven CT on July 2, 1932 to Richard and Anna Matchett Parks of New Brunswick, Canada. He leaves behind a wonderful companion Elizabeth Smith along with a son Richard E. Parks III and his wife Randy of Cromwell, CT , his grandson Ross and his wife Ally of New York City, a daughter Dawn Upright and her husband Rob of North Grafton, MA, his grandson Nicholas of New York City, and a daughter Gaelle Parks of Milford, CT. Dick was a proud veteran who served four years in the USAF with a tour in Korea during the 50's. Upon discharge he got his pilots license and enjoyed flying. He worked for W.I.Clark then UPS where he was involved in their expansion in the early 1970's living in Iowa, Georgia,North Carolina,Texas, and Arkansas until he returned to W.I. Clark where he retired. He was a member of the Sleeping Giant Men's Golf Club where he enjoyed playing golf with old high school friends Bill and Phil. He was a member of The Classic Car Club of America, and The Cadillac LaSalle Club. Along with golf Dick had a great love for automobiles. During his life he owned numerous cars (mostly antiques) motorcycles , and even a motorhome. During retirement he enjoyed being involved in the Hamden High School class of 1950 reunion committee , attending various car shows, and spending time with his family. Friends may visit with his family on Wednesday December 19, from 4-7 PM at BEECHER & BENNETT 2300 Whitney Ave. Interment in Hamden Plains Cemetery will be private. Memorial contributions may be sent to VA Hospitals by going to www.volunteer.va.gov, or Smilow at YNHH, by going to www.givetoynhh.org/closertofree, or The Masonic Charity Foundation P.O. Box 70 Wallingford, CT 06492.