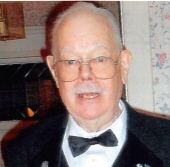 Richard Hadley Edwards, III, 85, husband of Shirley Faith (Horsman) Edwards, passed away peacefully in Hamden on June 10, 2015 after a lengthy illness. He was born in Boston on September 5th, 1929 to the late Richard Hadley, Jr. and Grace (Ingersoll) Edwards. He will be remembered always with great love by his wife Shirley, son, Richard, and daughter, Julie; both of Hamden, as well as two brothers, Aldrich, of New Haven, and Jared and wife Clare, of West Hartford. He was predeceased by his sister, Anne Boutwell. In addition, there are a multitude of nieces and nephews with their spouses and children, who will long remember Dick's 'big heart' when it came to love of family. Dick grew up in Cohasset and Concord, MA, a few memorable summers on a Vermont farm, and later at a family summer home in Chatham on Cape Cod. He attended the Fenn School in Concord and the Cambridge School in Cambridge before entering the United States Navy during the Korean War period. He served as a proud seaman first-class aboard the USS LSMR 522 for over 3 years in the Atlantic Fleet, after which he was honorably discharged. In 1953 he moved with his family to New Haven, his mother's birthplace. About the time of his marriage, in 1957, he settled into a career in retailing with a specialty in all manner of fine toys, games, hobbies, and model railroading. He served for many years as the toy buyer at the two downtown locations of the Edw. Malley Company, followed by several years as proprietor of the London Toy Shop, Ltd. in Spring Glen. He ended his retail career as a department manager with Caldor in Rocky Hill. Throughout his life Dick struggled with reading, which he overcame in large part due to his personal determination to join his siblings in family history research, which became one of his retirement 'passions.' This brought him into many years of visits to the books and artifacts of the past at the Eli Whitney Library of the New Haven Museum, which could provide him with more family information. This all led him to produce many reports of ancestral facts and timelines, as well as construction of scale models or drawings of historic family homesteads. One of his most prized ancestors was Lt. Joshua King of Ridgefield (1758-1839), his 4th great-grandfather, who served as a cavalry officer of Sheldon's Horse, Second Continental Light Dragoons during the American Revolution. Dick provided assistance to a re-enactment unit of these Dragoons, established as a non-profit educational organization formed here in Connecticut. In recent years he came to be a member of the Sons of the American Revolution and the American Legion. He truly was proud to be an American. Dick and his family shared their lives with many four-legged friends. He enjoyed many camping experiences around New England and occasionally special trips to places beyond our borders. This led to another special passion, to learn more about the lives of Native Americans and their cultures. Friends are invited to join members of Dick's family for a Memorial Service to celebrate his life on Friday, June 19, 2015 at 11:00 a.m. at the Spring Glen Church. BEECHER & BENNETT, 2300 Whitney Ave., Hamden in care of arrangements. In lieu of flowers, contributions can be sent to the Spring Glen Church, 1825 Whitney Ave., Hamden, CT 06517.