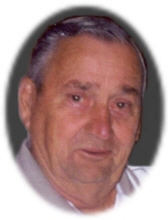 Richard J. 'Dick' Foley, Sr, age 82, of North Branford, formerly of East Haven, passed away January 8, 2009 in the Hospital of St. Raphael. Dick was the husband of the late Mary J. Sheehan Foley; father of Richard (wife Tracey) Foley of North Haven, Mary (husband Mark) Vendetto of Wallingford and Elizabeth (husband John) Nuzzo of North Branford, grandfather of Patrick, Daniel and Megan Foley, Melissa, Margaret and Moira Vendetto, Elissa and Amanda Nuzzo; brother of the late Frank and James Foley & Elizabeth Fincher. Dick was born in New Haven on September 6, 1926, as son of the late Edith Wruck Foley Fiorentino and step-son of the late Nick Fiorentino. Dick was a WWII Navy Veteran, assigned to the USS Bennington, a recipient of the Asiatic Pacific Ribbon, 3 Stars, Victory Ribbon & American Theatre Ribbon. A New Haven Fire Fighter for 37 years he retired in 1986. He was a member of the Wallingford Elks and a former member of the Knights of St. Patrick in New Haven. Funeral from BEECHER & BENNETT, 2300 Whitney Ave., Hamden on Monday at 9:00 AM, followed by a Mass of Christian Burial at 10:00 AM in the Church of the Resurrection, Pond Hill Rd., Wallingford. Friends may visit with his family at the funeral home on Sunday from 4 to 8 PM. Burial with Military Honors will take place in All Saint's Cemetery, North Haven. Contributions in his memory may be made to CT Hospice Inc, 100 Double Beach Rd. Branford, CT 06405 or to the Father McGivney Cancer Center, 1450 Chapel St., New Haven, CT 06511.