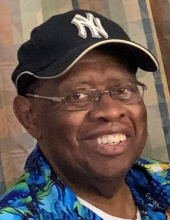 Richard L. Lawson, 74, of Meriden, Ret. Meriden PD, loving husband of Vicki Hicks Lawson, passed away on Friday, March 20, 2020 at Meadow Mills in Hamden. He was born in Meriden on November 26, 1945, a son of the late Thomas and Lula Spears Lawson. Besides his wife Vicki he is survived by his son, Bradley Andrews and his fiancee Gabriella Veguilla, daughter, Brittany Andrews, grandson, Liam Andrews, and sister-in-law, Diane Lawson. He is predeceased by his brother, Thomas Lawson Jr. A Memorial Service celebrating Richard's life will be announced and held at a later date.