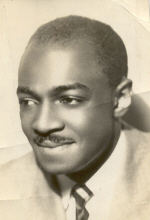 Richard S. Dowdy, Jr., 84, beloved husband of Grace Mebane Dowdy, of Hamden, passed away on May 25, 2010 surrounded by his family. He was born in Pittsburgh, PA on September 10, 1925 to the late Richard S. and Bennie Comer Dowdy, Sr. Besides his wife, Richard leaves his two sisters, Louise Dowdy Justice of Pittsburgh , PA and Jean Dowdy Tate of State College, PA; four nephews; one niece, Terry Lynn Parker and one special nephew, Rafeeq (Jerry) Salahuddin. He was predeceased by three siblings, Fannie Katherine Dowdy, Bernice Marcella Dowdy Smith, and James Dowdy. Richard grew up in Pittsburgh and lived most of his adult life in Hamden. He attended Morehouse College; earned his B.A. and M.A. in Economics from Duquesne University; studied at the University of Pittsburgh, culminating in candidacy for the Ph.D. in Economics; received his J.D. degree from Yale University Law School. Upon graduating from law school at the age of 42, Richard joined the personal staff of David Rockefeller working in the family offices in Rockefeller Center with central responsibility for the support of Mr. Rockefeller's participation in national organizations dealing with urban problems. Richard was a Professor of Business Law at Quinnipiac University for 26 years, where twice he was voted Faculty Advisor of the year. Before his long association with Quinnipiac, he had been an Urban League executive in Pittsburgh; Human Relations Advisor to Mayor Richard C. Lee of New Haven; founder of the Urban League of New Haven; lecturer on American Studies at Yale University's Foreign Student Institute; Interim Commissioner of Antipoverty operations under New York City Mayor John V. Lindsey; troubleshooter for the Federal Office of Economic Opportunity and the Ford Foundation; national panel of Arbitrators of The American Arbitration Association; associated with the Greater New Haven Business & Professional Association assisting minority businesses; long time Associate Fellow of Morse College of Yale University and has served on numerous boards and committees in the New Haven are, Pittsburgh, and New York City. An athlete since grammar school, Richard's talents led him to two seasons playing with the Harlem Globetrotters and semi-professional basketball and baseball, including the Pittsburgh Crawfords of the Negro League. He proudly served his country during WWII, as a B-25 crew chief in the Army Air Force and was a member of Luke's Episcopal Church in New Haven. Richard has enjoyed a lifelong love for sacred music and has sung in church choirs and other choral groups during all of his adult life. A Funeral Service will be held at BEECHER & BENNETT, 2300 Whitney Ave., Hamden on Saturday, May 29th at 10:00 a.m. followed by interment with Military Honors at Beaverdale Memorial Park. Friends may visit with the family from 9 to 10:00 a.m. at the funeral home.