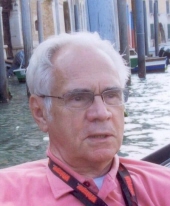 Richard W. Peckrul, age 79, of Rocky Hill passed away on April 5, 2016 after a brief illness. Born in New Britain on December 6, 1936 he was a son of the late William & Edith Andrulot Peckrul. A resident of Meriden for many years, he was predeceased by his wife Dorothy (Bloom) Peckrul and is survived by his wife Carol Ann (Newman) Peckrul. Richard also leaves step-children, Monica Dalton & Angelica Arce both of Meriden, Tom Curneal of Cromwell, Ray Arce of Florida, Christine Arce, Barbara LeBlanc & Michael LeBlanc all of Wallingford and Brian LeBlanc of Middletown and 9 step-grandchildren, including Joshua & Nathan LeBlanc. He was the brother of Robert Peckrul. A graduate of Plainville High School Richard then served in the US Army. He was retired from Pratt & Whitney Aircraft and he loved to travel, especially on bus tours. Richard was an Elder at St. John's Lutheran Church for many years, a member of the Rocky Hill Senior Center, and he enjoyed exercising daily at his local gym. Friends may visit with his family on Monday, April 11th from 10:00 to 11:00 AM at St. John's Lutheran Church, 520 Paddock Ave, Meriden, prior to his Funeral Service which will begin at 11:00 AM. Burial with Military Honors will follow in Gethsemane Cemetery. Arrangements are in care of BEECHER & BENNETT - FLATOW FUNERAL HOME, 48 Cook Ave, Meriden. In lieu of flowers, donations may be made to St. John's Lutheran Church, 520 Paddock Ave, Meriden, CT 06450.