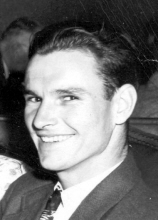 Hamden - Richard Wesley Bentley, Sr., 82, formerly of 83 Cumpstone Drive, died peacefully Aug. 21, 2005 at Gaylord Hospital in Wallingford with his family at his side. He was the husband of Lois Gustavson Bentley. He was born in New Haven, April 13, 1923 a son of the late Merton E. and Esther Powell Bentley and grew up in Westville. He proudly served his country in the U.S. Navy Submarine Corp in WWII. He worked as a stonemason and he owned the BenRoss Construction Company which sponsored many sports teams. He belonged to American Legion Post #88 and he was active in the Color Guard. Besides his wife he is survived by a daughter and her husband, Linda Woodward and John Coassin of Hamden, a son and his wife, Richard and Gale Bentley, Jr. of Hamden, three grandchildren, Heather Piccola of Clinton, Travis Woodward and Kevin Woodward both of Hamden, a great- grandson, David Piccola of Clinton and his feathered grandson, Kramer. He will be missed by his many friends and family. He was predeceased by his first wife Millicent "Millie" Bentley and a brother, Herbert Bentley. Funeral service Tues. (TODAY) at 8 p.m. at BEECHER & BENNETT, 2300 Whitney Ave., Hamden. The Rev. Owen Sanderson will officiate. Burial will be at the convenience of the family. Friends may call today from 6 to 8 p.m. Contributions may be made to the charity of one's choice.