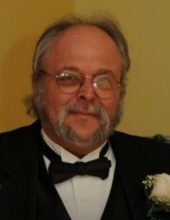 Rick A. Feathers Sr. 'Zep' 63, of Meriden, loving husband of Linda Snavely Feathers for the last 40 years, passed away on September 14, 2018 in Altamonte Springs, FL. Rick was born in Meriden to the late Ronald & Jean Chairo Feathers on December 30, 1954. He married Linda on July 29, 1978 in Meriden during a beautiful ceremony at Hubbard Park. Until his recent retirement when he relocated to Florida, Rick worked for over 25 years as a driver for Century Toyota/Wallingford Toyota. He was a veteran and served in the U.S. Navy. Rick is preceded in death by his maternal grandparents, James & Grace Papandrea Chiaro; mother-in-law, Mildred Adams Pellicane; brother-in-law, Joseph Trautman. In addition to his wife, Rick is survived by his three children & their spouses, Dana & Eric Hills of Meriden; Jaimee Feathers & fiance Dorian Overton of Altamonte Springs, FL; Ricky & Patty Feathers Jr of Meriden; his four beloved grandchildren, Riley & Dylan Self and Haley & Dante Belomizi; sister-in-law, Jeanne Snavely Trautman; nephew, Mark Trautman & wife Marybeth. He also leaves behind his fur-baby, Little Prince. You are not alone, confidential help is available for free at 1-800-273-8255 Family & friends are welcome to visit with his family on Monday, October 1st from 1:00 to 4:00 P.M. at BEECHER &BENNETT-FLATOW FUNERAL HOME, 48 Cook Avenue, Meriden. A Funeral Service Celebrating Ricky's life will follow at 4:00 in the funeral home. In lieu of flowers, donations can be sent to The Ricky Feathers Memorial Fund, 511 Gracey Ave., Meriden, CT 06451-2253 for his grandchildren's future education endeavors, He was SO proud of their accomplishments. To send a condolence to the family please see www.beecherandbennett.com