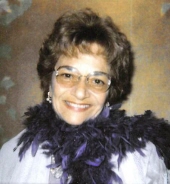 Rita Blossom Levine Earnest, 81, of Hamden, loving wife to Lance Earnest, passed away on October 23, 2016 at Masonicare in Wallingford, after a valiant battle with cancer. She was born in New York City on June 7, 1935 to the late Henry and Rose Flaster Roth. She is survived by her sons; Eli Levine and his wife Kathi of Andover, MA, and David Levine of San Francisco, CA. She also leaves her siblings Roxanne Cinnamon and Robert Roth, her 5 grandchildren, and several nieces and nephews. She was predeceased by her sister, Renee Bergman. Rita was an incredibly special and talented person who enjoyed gardening, poetry, photography, crocheting, crosswords and other puzzles, and many other hobbies, too numerous to count. Much can be said, however, about her storybook romance with her husband Lance, whom she met at the Colonial Thymes Restaurant in Hamden on the evening of August 16, 2006. Their relationship quickly blossomed as they realized they both enjoyed discovering new and many different hobbies such as whimsy, gardening, and collecting pictures, paintings, and toys. Rita's Bridge group quickly took Lance in as one of their own even though he never learned to play. They enjoyed many Memorial Day, 4th of July, and Labor Day picnics together, as well as many memorable Thanksgiving, St. Patrick's Day and New Year's dinners, all at the Quinnipiac Club or Yale Graduate Clubs. Their last dance together was on New Year's Eve 2015. In recent years their bond continued to get stronger, as their focus shifted to caring for Rita during her courageous battle. Through Rita's personality and many different interests, she touched so many lives, all of whom have special memories and relationships with her. She will be sorely missed by all who knew her. Relatives and friends are invited to attend a memorial service celebrating Rita's life on Saturday October 29, 2016 at 11am in BEECHER & BENNETT FUNERAL HOME, 2300 Whitney Ave., Hamden. In lieu of flowers donations in her name may be made to the Rita Levine Earnest Garden Memorial Fund on www.gofundme.com.