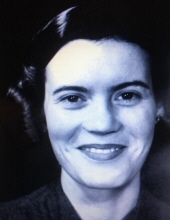 Roberdeau 'Robin' Callery DuBois (July 3, 1927 - December 27, 2019) died in Branford, Connecticut, near where she and her husband Arthur Brooks DuBois, M.D., had lived since 1974. Born in New York City, Robin was predeceased by her husband, Arthur B. DuBois M.D., her parents Francis A. Callery and Virginia Roberdeau Annan Callery, and her sister, Joanne Callery Heffelfinger. Robin attended The Chapin School, graduated from Milton Academy, and received an A.B. and an M.A. in Zoology from Smith College. After marrying Dr. DuBois in 1950, Robin and Arthur moved to Rochester, NY, Boston, MA, and lived in Philadelphia, PA, for twenty-three years before moving to New Haven, CT in 1974. Robin's interest in science began as a child by identifying the trees and plantings of Central Park. Her curiosity for the wonder of nature's wide variety of plants and animals stayed with her throughout her life. An award-winning horticulturalist, Robin DuBois was a member of the Garden Club of New Haven, the Planter's Club of Philadelphia, and the Pennsylvania Horticultural Society. Along with her curiosity for nature, Robin DuBois developed a deep interest in the multitude of mankind's culture. Among her adult studies at Yale University were the histories and art of Western, Middle Eastern, and Chinese cultures. With her husband Dr. DuBois, she expanded her studies by traveling to Europe, Japan, Australia, Iran, India, China and Tibet. These travels deepened her appreciation for the many ways we each see our world, and made her truly thankful for the fortunate circumstances of her own life, which stayed with her moment to moment. Of all the many places in the world, Robin's favorite was her second home in Woods Hole, Massachusetts, where she cared for her family with a gardener's touch. Robin served as president of the Colonial Dames Chapter II (Lemon Hill), and was a member of the Acorn Club (Philadelphia), the Chilton Club (Boston), and The Colony Club (New York). From her marriage of nearly seventy years to Dr. Arthur B. DuBois, Robin leaves her children: Anne R. DuBois, Brooks and his wife Mary Salerno DuBois, and James E.F. DuBois and his late wife Desca Duncan DuBois, and grandchildren Laura B. DuBois, Brooks Michael DuBois, and Marian R. DuBois. Robin also leaves many nieces and nephews, and her brother James Callery and his wife Holly Ti'an Callery. A Memorial Service honoring the lives of Robin and her husband Dr. Arthur DuBois will be held on Saturday February 8, 2020 at 11 a.m. in Dwight Hall at Yale, 67 High St. New Haven, CT. Interment will be held at Church of the Messiah Cemetery in Woods Hole, MA at a later date per the convenience of the family. Arrangements are in care of Beecher & Bennett Funeral Home, Hamden.