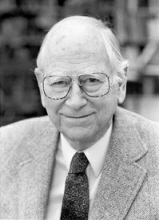 Robert Alan Dahl, Ph.D., Professor Emeritus of Political Science, Yale University, passed away on February 5, 2014 at Whitney Center in Hamden where he resided. Formerly of North Haven, he was the husband of Ann Sale Dahl and the widower of Mary Louise Bartlett Dahl. Born in Inwood, Iowa on December 17, 1915, he grew up in Alaska, a son of the late Peter Ivor and Vera Lewis Dahl. A graduate of the University of Washington in Seattle, he received his Ph.D. from Yale in 1940. In 1943 he entered the U.S. Army, in the 71st Infantry Regiment, 44th Infantry Division as a Private, later receiving a battlefield commission as a First Lieutenant. He was awarded a Bronze Star Medal for his service in World War II. He joined the faculty of Yale in 1946 in the Political Science Department. He served as Eugene Meyer Professor of Political Science from 1955-1964 and Sterling Professor of Political Science from 1964 until retiring in 1986. Prof. Dahl was a leading authority on democratic theory. He was the author of numerous books and articles, he has more than a dozen honorary degrees and awards from around the world. His 1998 book, On Democracy, has been translated into over a dozen languages. Prof. Dahl is survived by daughters, Kirsten Dahl of New Haven, Sara Connor and her husband Dan Connor of Sturbridge, MA, and Jane Thery of Washington, DC; sons Eric Dahl and his wife Barbara of Goleta, CA, and Christopher Dahl of Portland, OR; nieces Karen Dahl, Margit Dahl and Kristin Dahl; nephews Gary Dahl and Erik Dahl and grandchildren, Edward Williams, Charlotte Connor, Ariella Kraintz, and David Connor. He was predeceased by his son Peter Dahl and brothers, Roger and Lewis Dahl. Friends and family are invited to attend a Memorial Service for Prof. Dahl on Thursday, May 29, 2014 at 1:30 p.m. in Battell Chapel, Corner of College & Elm Streets, New Haven. An earlier Memorial Service was held on Saturday, March 8th at 3:00 PM in Whitney Center, 200 Leeder Hill Dr., Hamden. Arrangements are in care of BEECHER & BENNETT FUNERAL HOME, 2300 Whitney Avenue, Hamden.