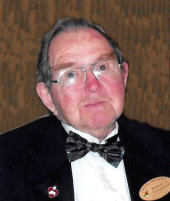 Robert A. Songhurst, 89, of West Haven passed away on Wednesday, December 23, 2015 at Masonicare in Wallingford after many years of medical problems and battling Alzheimer's disease for 11 years. He was born in Southington on October 24, 1926, son of the late Arthur R. & Lucille (McKay) Songhurst. Bob moved to Milford in 1940 and graduated from Milford High School in 1944. He honorably served in the U.S. Navy during World War II and then attended LaSalle College. After 40 years of work, Bob retired from Raybestos Manhattan in Stratford. He was an avid bowler and golfer, and was a member of several industrial leagues. He also enjoyed volunteering his time as a little league coach in Milford. Bob was member of Ansantawae Masonic Lodge No. 89 AF & AM and Lucia Chapter Order of the Eastern Star. He was a parishioner at the First United Church of Christ in Milford. Bob is survived by his loving wife Ruth (Hubbard) Songhurst; his son Robert G. Songhurst and his wife Francesca; grandson Robert T. Songhurst; and several nieces and nephews. Relatives and friends are invited to meet with Bob's family on Wednesday, December 30, 2015 from 10:00-11:00 a.m. at BEECHER & BENNETT-TAYLOR FUNERAL HOME, 410 Campbell Ave., West Haven. Funeral service will take place in the funeral home at 11:00 a.m. A Masonic Service will be held prior to the funeral service, at 10:45 a.m. Burial of Bob's cremated remains will follow in King's Highway Cemetery, Milford with Military Honors. Memorial donations in Bob's name can be made to the The Masonicare Annual Appeal c/o The Masonic Charity Foundation of Connecticut, P.O. Box 70, Wallingford, CT 06492.