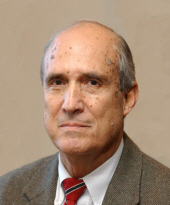 Robert Arbuckle Berner of North Haven, the Bateman Professor of Geology Emeritus at Yale, passed away Jan. 10, 2015 after a long illness. Bob was born Nov. 25, 1935 in Erie, PA son of Paul & Priscilla Berner. He graduated from University of Michigan and earned his Ph.D. at Harvard. In 1959, Berner married fellow geology graduate student Elizabeth Marshall Kay. They collaborated on 3 books about the global water cycle and environment. Berner also was the author or co-author of hundreds of journal articles, the author of 3 other books and was a Most Cited Scientist by the Institute for Science Information. Per Yale's Geology Chair Jay Ague, 'Bob was one of the greatest geochemists and, more broadly, geologists who ever lived. It is simply impossible to list all of his accomplishments. He was also a thoughtful teacher and mentor, inspiring a whole generation of geochemists. His work provided the basis for virtually all modern carbon cycling research going on today.' Bob was awarded the prestigious Franklin Medal from the Franklin Institute for 'deepening our understanding of the Earth system through studies of the chemistry of geological processes and their influence on the atmosphere and oceans.' He was elected to the Natl. Acad. of Sciences and received an honorary Doctorate from the Univ. Aix-Marseille. He received many other honors including a Guggenheim Fellowship and 6 honorary scientific medals. Bob also had a tremendous sense of humor and enjoyed telling amusing stories to his family, composing and listening to music, fine wine, visiting Hawaii, old movies, and the New York Yankees. He is survived by his wife, Elizabeth; their three children, John (Cathy) of Houston, TX; Susan Wenger (Mark) of Swarthmore, PA; James (Sheila) of Westport, CT; as well as a brother Paul Berner, of La Porte, TX, and 7 grandchildren. In lieu of flowers, donations in Bob's name can be made to: Geology Graduate Research and Field Studies fund c/o Rebecca Pocock, 210 Whitney Ave. New Haven, CT 06511. Funeral arrangements are private and under the direction of BEECHER & BENNETT, 2300 Whitney Ave., Hamden, CT.