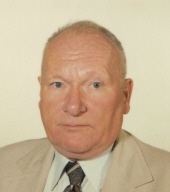 Robert Asbury Colbourn, 91, of North Haven, husband of 62 years of Ruth Wilson Colbourn passed away July 1, 2014 after a brief illness. Brother of David Colbourn of Branford and the late Eleanor Gabriel. Bob was born in New Haven August 2, 1922 a son of the late Harry B. and Norma Beardsley Colbourn and had been a resident of North Haven since 1952. He served in the US Army during WW II with the 3622 Quarter Master's Truck Co. in North Africa and Europe, and was employed by the Getty Oil Co. as a maintenance engineer in CT and MA prior to his retirement. He joined the Adelphi Lodge in 1946 and became Master of the lodge. He was Past Right Emminent Grand Commander of the Grand Commandery of CT, and was a 33rd Degree Member of the Scottish Rite. Robert was a recipient of the Pierpont Edwards Medal in Bronze for Distinguished Masonic Service. Funeral service will be held on Monday July 7, at 11 am at BEECHER & BENNETT, 2300 WHITNEY AVE., HAMDEN. Friends may visit with his family Sunday from 4-7 pm. A Masonic Service by Corinthian Lodge # 63 A.F. & A. M. will be at 6:30. Interment in North Haven Center Cemetery. Memorial contributions may be made to the Masonic Charity Foundation, www.masonicare.org/mcf , PO Box 70, Wallingford, CT 06492.