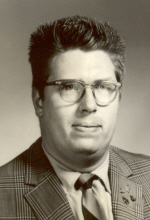 Robert B. Chalmers, Jr. age 69, of Hamden, passed away on May 19, 2010 at the West Haven Veteran's Medical Center. Robert is the husband of Carol Ann Zadnik Chalmers; father of Robert B. Chalmers, III of Guilford; brother of William E. Chalmers of Madison, Helen Stanley of Wolcott and the late Thomas F. Chalmers. Before his retirement Robert was a former warranty manager at Truck Center Inc. in North Haven, a teller for the Bank of Boston & Second National Bank and was a security guard at Whitney Center in Hamden. He was an Air Force Veteran, member of the American Legion Post 88 and Past President of St. John the Baptist Church Holy Name Society. He served as Director, Secretary, Treasurer and External Vice President of the Hamden Jaycees, and was a member of the Knights of Columbus Fr. Charles Kavanaugh Council # 7124. His funeral will leave from BEECHER & BENNETT FUNERAL HOME, 2300 Whitney Ave., Hamden on Saturday, May 22, 2010 at 9:30 AM, followed by a Mass of Christian Burial at 10:00 AM in the Church of the Blessed Sacrament. Friends may also visit with his family at the funeral home on Saturday morning from 8:30 am to 9:30 am. Interment with Military Honors will take place in All Saints Cemetery, North Haven. Contributions in Robert's memory may be made to the Association for Retarded Citizens, 109 Sanford St. Hamden, CT 06514.