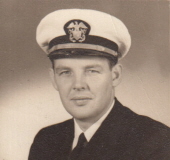 Robert 'Bob' E. Johnson, age 97, of Hamden, passed away on March 11, 2013. Born in New Haven on August 30, 1915, he was a son of the late Adolph & Edna Robbins Johnson. Robert is survived by his wife of 70 years, E. Virginia Vickrey Johnson; his sons, Ronald Johnson & his wife Linda and Keith Johnson all of Hamden; his daughters, Jennifer Johnson & her husband Arthur W. of North Haven and Dianne Clifford of Portland, OR; his daughter in-law, Jill Johnson-Noel & her husband John Noel; his grandchildren Tynika, Shandel, Dayna, Jessica, Ashley & Rob; his great grandchildren Ayla & Nerys and his brother Howard Johnson of Branford. Robert was predeceased by his son Gregory Johnson and his grandson Brian. A graduate of Hillhouse High School, Mercersburg Prep in Pennsylvania, Ohio State University and received his Masters Degree & Sixth Year Degree from Southern Connecticut State University. He was a competitive swimmer and an aquatic safety instructor with many accomplishments which lead to his induction into the International Hall of Fame. While at Ohio State he was a National Swimming Champion, he won the Cross Harbor Swim in New Haven and held many swim records at Mercersburg Prep. He volunteered as an official for the Special Olympics, the Senior Olympics and US Swimming Competitions. Robert volunteered at the Red Cross for over 50 years, the AAU and he coached and taught at the Branford Middle School. For his 70 years as a swimming teacher, coach, water safety instructor and safety official, he received the Paragon Award from the ISHOF. Robert was the vice president of the former Bellmore - Johnson Tool Co. in Hamden and former swim coach and physical education teacher for over 20 years at Yale University. A WWII Veteran, he was a Lieutenant Commander in the Navy, Robert spent most of his life in Hamden, his summers in Mansfield Grove in East Haven and he always enjoyed playing the piano. His funeral will be held privately with his family. Arrangements are in care of BEECHER & BENNETT FUNERAL HOME, 2300 Whitney Ave, Hamden. In lieu of flowers contributions in Robert's memory may be made to the American Red Cross, 703 Whitney Ave, New Haven, CT 06511.