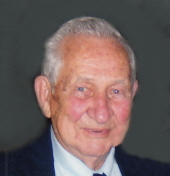 Robert 'Bob' F. Smith, of Ashlar Village, Wallingford, formerly of Gun Shot Road, Waterford, and Shepard Avenue, Hamden, died February 11, 2013, at age 92. Born on December 21, 1920 in New Haven to the late Herman A. and Gertrude Graebner Smith. He was predeceased by his first wife, Ruth M. Munck in 1985 and his siblings, Herman D. Smith & Lois S. Widmann. Bob is survived by his wife of 25 years, Genevieve Hennessey Smith; daughter, Barbara S. Day & her husband Nicholas McGray of Oxford, MA; sons, Robert F. Smith Jr. & his wife Doris of West Haven, and Richard D. Smith of East Haven; two grandchildren, Justin Day& his wife Heather of Worcester, MA, and Heather Smith Jaser & her husband Tarik of Milford; great granddaughters, Nyla Jaser of Milford & Julia Hennessey of Shrewsbury, MA. Also included in his happily extended family is Gen's son, Dr. James Hennessey and his wife Kathy, of Needham, MA, and their three sons, James, Jr. & his fiancé Laura Vaillancourt of Rutland, VT, and Ian & his wife Beth of Shrewsbury, MA and Patrick of Albany, N.Y. While living in Hamden , he was a Charter Member and past President of the West Woods Vol. Fire Co. #9, and was a member and Past Master of Hamden Grange #99. He was a member and Past Commander of New Haven Power Squadron, and a member of New London Power Squadron, where he taught many classes in boating safety. He was a member of Day Spring Lodge #30 of Hamden, Ashlar Lodge #332 of Wallingford, Sphinx Temple, Bedouin Shrine Club, National Camping Travelers, Travelers Woods Campground of New England in Bernardston, MA, in which he was part owner and Charter Member, and the Colonial Craftsman Club of Colonial, MA. He was also a member of Wallingford Lodge of Elks, Sound Steppers Square Dance Club, and a volunteer at the Groton Computer Center . He was a veteran of WWII, U.S. Army Air Force, last serving in the South Pacific at North West Field on Guam, attached to the 30th squadron, 19th Heavy Bombardment Group as an engine mechanic on B29's. He retired from Pratt & Whitney Aircraft in 1981 as a Design Analyst, after 29 years of service in the Engineering Design Departments of Chance-Vought Aircraft of Stratford, & Pratt & Whitney Aircraft of North Haven and East Hartford. He enjoyed woodworking, hiking, biking, and was an avid boater and camper. Bob's Funeral Service will be held on Thursday, February 14th at 11:00 a.m. at BEECHER & BENNETT, 2300 Whitney Ave, Hamden followed by his burial with Military Honors at Beaverdale Memorial Park. Friends are invited to visit with his family before the service from 10:00 to 11:00 a.m. Contributions in Bob's memory may be sent to Masonicare Hospice, c/o Masonic Foundation, 22 Masonic Ave, Wallingford, CT 06492.