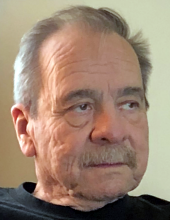 Robert 'Bob' Pope, 73, born on January 28, 1946 in New Haven, CT, passed away peacefully on Sunday, September 15th at the WHVA Hospital after a very long battle with numerous medical conditions. Bob was predeceased by his parents, Warren and Olga (Konopacke) Pope. He is survived by his daughters, Jennifer Wargo of Middletown and Lindsey Pope of Kensington, along with his grandchildren Amelia and R.J. In addition, he leaves his two brothers; Arthur of Old Saybrook and Warren of Daytona Beach, Florida, and a sister, Diane of Guilford. Bob was a quiet man who kept to himself for the most part, however, once he felt comfortable with you and let you into his 'little bubble' he considered you family. Besides his biological family, he leaves a very special family; Audrey, Dan, Ashley and Rachael Case. Over the years they became a large part of his daily life, whether it was phone calls checking in on him, moving furniture for him (only to move it again ten minutes later), celebrating birthdays because he loved parties no matter the occasion, or just sitting next to his bed for hours during one of his numerous hospitals stays making him laugh and feel comfortable with all of the love and support we always showered him with. If the girls learned anything from him, I hope it was not to put their hands on the walls! Before his retirement, Bob enjoyed a long career as an auto body technician/painter. He still found joy in going down to J.M. Montesanto's every few weeks to see what the guys where up to and truly missed being a part of the team. Bob enjoyed the simple pleasures of life and all who knew him knew he needed nothing more than a Bud Light and a pizza to make him happy. He especially loved looking for 'treasures' and could always find the beauty in something. He had the knack for making it shine again no matter how old and rusty it may have been. One of his favorite pastimes was going on car rides with his daughter Lindsey, taking in the fresh air, having a few drinks, and looking for Pick Your Own Vegetable farm stands, where he was sure to always receive the 'senior discount.' Bob also had a unique sense of humor, and enjoyed giving you a good chuckle. He had a mischievous smile that you couldn't help but smile back at. There are no words to describe how much he will be missed. Bob's daughter Lindsey would like to say thank you to his neighbor Linda for all the care and love that she showed him throughout his long illness. Daddy always counted on you to make him laugh even on days when he didn't think he had it in him. Lindsey would also like to thank the outstanding medical staff at the WHVA for all of the love and support they showed both Bob and herself on a regular basis, for the exceptional care that he received over the past several years, and for making him feel right at home each and every stay. Over the years you became more like his extended family rather than a team of medical professionals. Thank you again for making the WHVA his 'safe place,' as he always called it, and for always helping me feel better even on my darkest days. Calling hours will be Sunday, September 22nd between 3 and 5 p.m. at Beecher and Bennett Funeral Home, 2300 Whitney Ave., Hamden. A Celebration of Life will follow immediately. Please join us to celebrate Bob with some of his all-time favorites: salad, pizza, root beer floats (also known as 'belly busters'), and Bud Light, because 'what's a party without beer!' And of course, anyone who knew Bob knows no party can ever start without exclaiming 'Let the Festivities Begin!' In lieu of flowers, donations in Bob's memory may be made to the West Haven VA Medical Center, 950 Campbell Ave., West Haven, CT 06516.