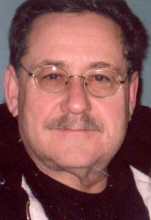 Robert Charles Letkowski Sr., 59, formerly of West Haven and North Haven, passed away on August 19, 2010 in New Haven. He is survived by his former wife Denise Letkowski. Also survived by his 3 children. Daughter Robin Shura and her husband Ed of Wallingford. Son Robert 'R.C.' Letkowski Jr. and his wife Katherine of Madison. Daughter Heather Letkowski of Wallingford. He will be greatly missed by his 5 grandchildren, Justin Letkowski, Morgan Shura, Madison Shura, Hayley Shura, Riley Letkowski and expected soon, grandson Corey Letkowski. He was predeceased by his parents Adolf and Stella Sczesnowicz Letkowski. Robert was born in New Haven on March 21, 1951. He served in the U.S. Army and was a Vietnam Veteran. He was a proud 25 year Union member of Carpenters Local 24. His hobbies include Hunting, Fishing, Cooking and Motorcycles. Friends may visit with family Monday August 23, 2010 from 5 to 8 at Beecher and Bennett-Taylor, 410 Campbell Ave, West Haven.