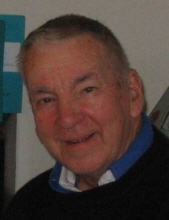 Wallingford- Robert F. Bowen, 81, husband of 38 years to Lynne (Belden) Bowen died peacefully on Monday, December 27, 2010 at MidState Medical Center. He was born in Meriden on May 16, 1929 a son of the late Joseph and Annette (Hamelin) Bowen. Bob was an electrician, having worked for Insilico, Burr Electric, Valley Oil, Cuno and Masonic Healthcare Center, he owned his own oil service company, B&L Oil and was even a greeter at WalMart. He was a veteran having proudly served his country during the Korean Conflict in the U.S.Army. Bob was active with the community, he was a member of the Antique Veterans, the South Meriden Volunteer Fire Dept., and past president of Washington Park Drum Corp. He loved playing the trumpet, from his days in the drum corp, to his own band; the Bob Bowen Dance Band, to playing at veteran's funerals. He also was an avid train buff, a private pilot and golfer. In addition to his wife Lynne, he is survived by four children, David Bowen of Wallingford, Sally Clark and her husband Alan of Durham, Gregory Bowen and his wife Sarah of Wallingford and Stacy Bowen also of Wallingford. He also leaves two cherished grandchildren; Julia Bowen and Christopher Clark, a brother Wilfred Bowen and his wife Grace of Canada, a sister, Janet Sprude of Meriden as well as several nieces, nephews and cousins. He was predeceased by his first wife, Virginia Sparks. Bob's family would like to thank doctors Richard Bugliari, William Farrell, Jamani Nadkarni, Irfan Chughtai and Nirmala Ramadhar-Persaud and nurses, Kathy, Ann and Sophie for the wonderful care and comfort given to Bob and the family. A Celebration of Bob's life will be held on Friday December 31, 2010 at 1:00pm at Wellspring Church, 222 Lincoln St, Berlin, CT 06037. The Beecher and Bennett Flatow Funeral Home, 48 Cook Ave., Meriden has been entrusted with the arrangements. Memorial donations may be made to the American Cancer Society, 825 Brook St., I-91 Tech Center, Bldg.#3, Rocky Hill, CT 06067.