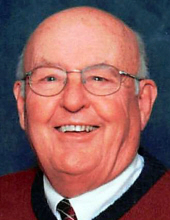 deLAUBELL, ROBERT FREDERICK, SR. - 09/15/1927 - 06/22/2018 Bob was the son of Frederick Traub deLaubell and Pauline Kurtze deLaubell. He was born in New Haven, CT on September 15, 1927, and lived most of his life in Hamden. He is survived by his loving wife Joan Nygard deLaubell, a son Robert F. DeLaubell, Jr. and his wife Janet of Cheshire, a daughter Janice B. Morris and her husband Kevin of Hamden. He is also survived by seven grandchildren, Alyssa, Benjamin, and Conner DeLaubell of Cheshire, and Kevin, Ryan, Patrick, and Colin Morris of Hamden. He will be missed by all of his grandchildren. He is also survived by a sister-in-law Lois deLaubell, a nephew Paul deLaubell, a niece Carol Matthews, three grand nephews, and two great grand nephews, all of New York. He was predeceased by a brother Russell deLaubell. Bob was a lifetime member of Trinity Evangelical Lutheran Church of New Haven, serving in many roles. Bob graduated from Hillhouse High School, class of 1945. He enlisted in the U.S. Navy at age 17 and served on active duty. He received an Associate's degree at New Haven College (now University of New Haven), and in 2009 was awarded an Honorary Bachelor of Science degree. Bob served in the U.S. Postal Service for 42 years in many roles including Letter Carrier, Branch Superintendent, Compensation Officer, acting Post Master, and Manager of Training and Development. Upon retiring, he began a second career in Real Estate for 12 years with the former Beazley Company, holding a CT Realtor's License and CT Appraiser's License. Bob was a Red Cross blood donor, and gave 114 pints of blood. Bob enjoyed traveling, swimming and the outdoors. Services will be held at Trinity Evangelical Lutheran Church, 292 Orange Street, New Haven, on Monday, June 25 at 10:00. Burial will be private. Memorial gifts may be made to Trinity Lutheran Church. Arrangements are in care of Beecher & Bennett, 2300 Whitney Ave., Hamden.