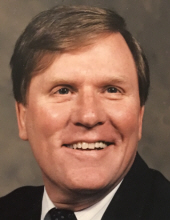 Robert Forrest Longley, beloved husband of 53 years to Joan Marie Longley died peacefully on January 14, 2020 at the West Haven Veterans Hospital surrounded by his loving family. Devoted father to Joan Denise Wyzukovicz (John) of Elgin, Illinois and Robert Forrest Longley, Jr. (Maria) of Oxford. Loving grandfather of Emily Wyzukovicz and Makayla, Isabelle, and Robert Forrest Longley III. He is also survived by his sisters, Barbara Carr (Bob) and twin Joan Charbonneau, both of Wallingford, and was predeceased by his sister Gail Longley. Born in New Haven on March 5, 1942, he was the only son of Virginia and Gerald Longley. Robert was an Electrical Engineer at SNET for 27 years and served in the Navy on the USS Newport News during the Cuban missile crisis. He was an active member of the United Methodist Church in Hamden for over 50 years. He served on several committees of local civic groups, including the Hamden YMCA Y's Men's Club, and participated in the MS Group at the West Haven Veterans Hospital for many years. Robert was a very special person and a wonderful father. Full of life, love, and laughter; he will always be remembered for his good humor and generosity. The family wishes to thank the many doctors and nurses who took care of Robert during his stay in the West Haven Veterans Intensive Care Unit. Calling hours will be Sunday, January 19th from 4-7 p.m. at Beecher and Bennett Funeral Home, 2300 Whitney Avenue, Hamden. A memorial service will be held on Monday, January 20th at 10:30 a.m. in the Hamden Plains United Methodist Church, 15 Church Street, Hamden. Committal of ashes will be coordinated by the Navy Burial at Sea Program. Should friends desire, in lieu of flowers, memorial contributions can be made to the MS Society at www.nationalmssociety.org, or to your favorite charity.