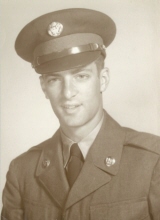 Robert F. Polito Sr., 82, of Cheshire, CT, loving son of the late Louis and Frances (Sanzeri) Polito, passed away peacefully, surrounded by his family, at the Hospice Unit at Masonicare in Wallingford, CT on February 1, 2017. The ravages of a rare form of dementia, known as Pick's Disease, took away his memories and his gregarious personality. Bob was born in Astoria, NY on July 1, 1934. Bob moved to Westville, CT where he lived with his extended family in a large 4-family duplex built by his grandfather. He married his high school sweetheart, Annette (Yulo) Polito in 1956, married for over 60 years. They moved to Cheshire in 1959, after living in the same apartment with her sister and brother-in-law, above her parent's two-family home on Rosette Street in New Haven. Bob worked almost his entire career in the Cheshire Post Office. In 1993, after 33 years, with many good friends at the Post Office, he retired and worked part-time at Bloomingdale's in Cheshire in their shipping operations center. Bob was also a proud veteran of the Korean War era in the US Army. Bob loved to tinker, take things apart and put them back together. He rebuilt his own engine on his Bonneville, which then caught on fire on the Merritt Parkway. He had large collection of antique clocks, none of which ever chimed in unison. He also made grandfather clocks for his children. He was a model-railroader with a large model railroad in his basement. He was also a self-taught woodworker and carpenter, making many original pieces that are proudly displayed in his children's homes. Like his father Louis and son Bob Jr., Bob was also a proud 42-year Freemason, raised in Temple Lodge #16 in Cheshire in 1974 and then joining his son in Trumbull Lodge #22 in New Haven. Bob's gentlemanly character, integrity and sense of fairness was a guiding beacon for his family, as was his sense of humor, fun-loving and good-natured personality. He will be missed. Bob is survived by his devoted wife Annette, his son Robert Jr. (wife Lori) of Madison, CT and daughter Francine Shannon (husband Richard) of Southbury, CT and his two grandchildren, Ryan Robert and Emily Rose Shannon. Bob is also survived by his special and devoted brother-in-law, Dr. Ralph J. Yulo and his wife Ruth and many nieces and nephews. Bob was predeceased by his sister Evelyn and husband Pat Caporale. Bob was blessed with numerous and long-time friends. Special post office friends were Jimmy and Ann Jamele, but his relationship with his best friends, Andrew and Virginia Catapano of West Haven, spanning over 75-years, was extra special. He was truly blessed. The family wishes to thank the Masonicare staff on 3 Wooster and the hospice unit for their extra special care of Bob in his final days. Friends may visit with his family at BEECHER & BENNETT 2300 Whitney Ave. Hamden Monday morning February 6 from 10:30 -12:00 and are invited to attend a Mass of Christian Burial in St. Bridget Church 175 Main St Cheshire, at 12:30 pm. Donations can be made in his name to the Masonic Charity Foundation, 22 Masonic Avenue, Wallingford, CT.